In a few hours the negotiations between Israel and Palestinians are to start once again. About 18 hours ago Hamas had its say, when it sent a team of murderers to kill some Jews, unarmed civilians all of them.

I accept that the leaders of the Palestinian Authority are furious, and their crackdown on Hamas is real. On the diplomatic front the attack weakened their hand, they hate Hamas, and so on. (Though the question remains: why clamp down today, and not last week, or last month...). The problem is that the position of the PA is not really important, since there's no way they can deliver.

I am in favor of the two-state solution, and have been since the 1970s, many years before mainstream Israel accepted it, and even more years before the PLO did. If peace can't be achieved, as I'm sadly convinced, I'm in favor of Israel moving behind the fence and dismantling the settlements beyond it. However, I'm also in favor of Jews living their lives in peace, or if that can't be achieved, in relative security. Here are some images I recommend be pondered on this afternoon after the murder of four Israelis by Palestinians and before the renewal of talks.

The first is the map suggested by the Israelis, Palestinians and Europeans of the Geneva Initiative. The significance of the map is that at least some moderate Israelis and moderate Palestinians signed on it, even though there's probably little popular support for it on either side. Still, we can use it as an approximation of what a border between the two states might be. (The online version is here). 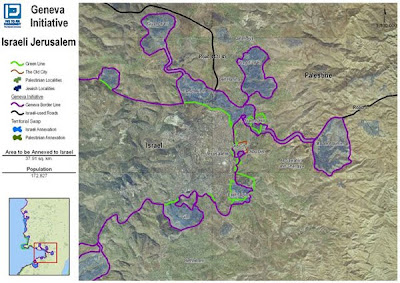 Now, let's look at the ground-level picture, the one people live at: 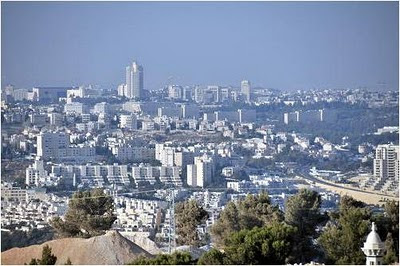 This was taken a few weeks ago by Michael Totten (the online original is here). Note the mosque turret in the lower right corner: That's Beit Safafa. Everything else in the picture is West Jerusalem, from Ramat Sharet in the foreground, the government offices in the middle, and the central bus station and the Crowne Plaza hotel on the skyline. Olmert's "Holyland" Project is on the left edge, and just beyond the edge is the Knesset. Here, I've drawn a rough outline of the section of Jerusalem in the picture: 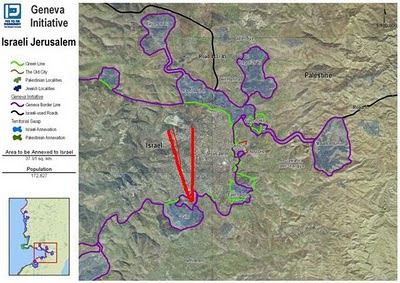 Can anyone imagine allowing Hamas murderers or some future permutation of Islamist thugs onto the hill in Beit Safafa Michel Totten was on when he took that picture? Remember, it will be a sovereign foreign country; if Israel tries to stop anyone from shooting from there it will be a breach of that sovereignty, or, in simpler language, an invasion.
Posted by Yaacov at 5:08 PM

Juniper in the Desert said...

Yes, Barak Obama can imagine it - after all, Israelies must take risks for peace

from all I've ever read about war I remember that commanding the high places is of supreme importance.
Whoever tells Israelis that giving up that high place is just "taking a risk" is bananas.
Taking a risk is betting on a horse not gambling with one's life by trusting people who fire at close range on a 9 months's pregnant woman, there is no way that fact can not have been noticeable. To be forced to hope that that baby had a swift death is perverse. In my book there were five people killed not four.

Ulrich Sahm has compared the compassion in our German foreign minister' reaction to the murder's victims to previous reactions by him
http://www.achgut.com/dadgdx/index.php/dadgd/article/guido_gnadenlos/
I think it is worth a Google translate
Silke

Ehud Barak's breezy talk of dividing Jerusalem will go nowhere. It would have to be imposed by force. His viewpoint, I think, is not representative of the Israeli government's thinking about the parameters of a hypothetical peace agreement.

I say "hypothetical" because Hamas will never accept one even in the unlikely event that Israel gives the PA 100% of its demands and receives nothing in return.

(And more than somewhat appropriately, next week, we will be reading the story of Akedat Yitzhak---the binding of Yitzhak.... Stay tuned!!)

and yet even more!