Asael Street is on the Green Line in Abu Tur, on the hill south of the Old City. It's a small street, which can be entered by car only from the south, where the skeleton of a 1948-67 IDF bunker still stands, a reminder of the 19 years in which the neighborhood was divided between Israeli territory in the West, and Jordanian territory in the East; in those days the line between the homes was hostile and sometimes violent. The years of peace and prosperity since 1967 have encouraged the locals to build right up to their respective national lines, and the result is that along the entire line in Abu Tor, Jewish and Palestinian homes sit next to each other. In the picture below, the red-roofed building is Palestinian, and the building facing it to the left is Jewish. They're both on Asael. 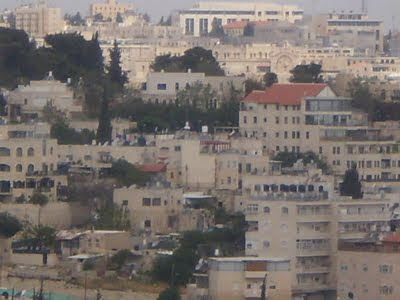 Here you can see how narrow the street is; in this picture the red-roofed building is on the left. 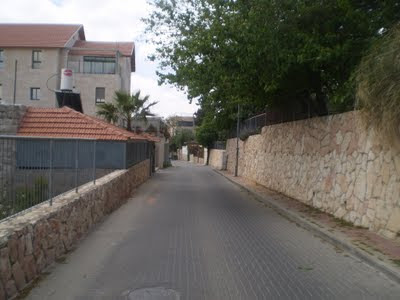 Here's the street from its entrance: 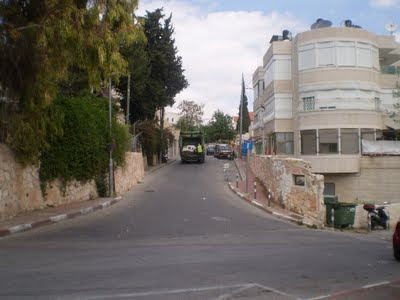 All the people who live on the street enter their homes from it, which means that if this narrow little lane were to become a hostile international border, no-one could enter or leave their homes. Yet let's hope, unrealistically, that it won't ever be hostile. You may have noticed the green garbage truck on its way into the street? Here, have a closer look: 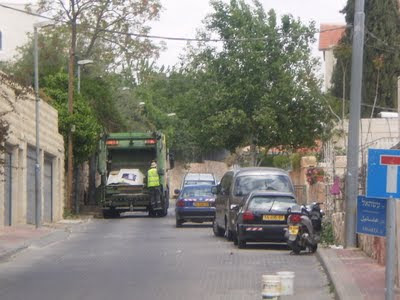 Since there are cars parked on one side of the street, the truck had to inch by them, so narrow is the street. If the city is ever divided, there will need to be two different trucks, each serving its respective side. No, don't tell me the services will remain unified, since they won't: One of the most essential aspects of sovereignty is that society determines its own priorities. That means one side may decide to buy new garbage trucks every eight years, while the other allocates funds for garbage trucks only once in 20, because it has other priorities. On one side garbage workers are paid at Israeli wage levels and come by every two days; on the other side they may be paid only a quarter, or a fifth, and come by only once every three days. Or vice versa, what do I know: maybe it will be the Palestinian ones who come by every day, and do a great job, while the Israelis will only come by once a week, and in the meantime the Jewish neighbors will throw their garbage onto the Palestinian side. Since there isn't a single such place anywhere in the world, it's hard to know what the specific grudges will be and how they'll poison the atmosphere on this peaceful little alley - but they probably will.


At the end of the street it turns west, so that the final homes on both sides are all Jewish. 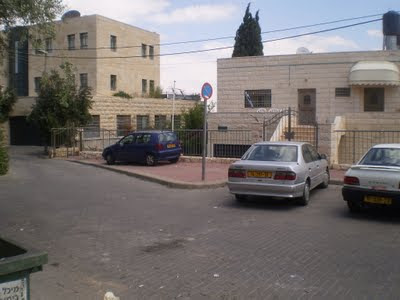 The building on the right is Palestinian; the one on the left is Jewish. And the picture below shows the intended border. 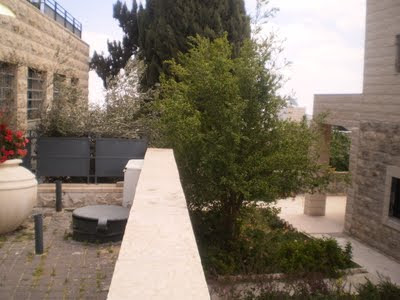 Have I mentioned I find this whole proposition to be extremely idiotic?

Having finished looking south of the Old City, I went to its north, and described the sights there. I assure you, there are new aspects to the story there, new degrees of oddness.
Posted by Yaacov at 12:08 PM

Its never going to happen. Israeli politicians talk of it breezily but they know it would never pass in a referendum. The Arabs may hate living under Israeli rule but they know their Arab brethren would treat them far worse.

Every proposal to divide Jerusalem flies in the face of popular sentiment as well as reality.The only way a division of the capital could happen would be to to impose it by force. And who is going to police a divided city?

And the separation wall running around the city from west to north to east to the south precludes such talk. No Israeli politician who wants to get re-elected is going to take down that wall.

For the foreseeable future, Jerusalem will remain a united city under Israeli rule for lack of a more promising solution acceptable to everyone.

Nu, and if the street were wide enough to put a wall through it and drive a garbage truck up and down and have double parked cars... you wouldn't worry about being bombarded from the other side?

Except that creating a Palestinian state and dividing Jerusalem have nothing to do with logic.

Nor do they have anything with peace.

In fact, the opposite.

Barry, it has to do with old-fashioned anti-Semitism.

Ya'acov knows this. If the Palestinians wanted a state, they would accept Israel's offer and prepare for a real future.

There is not going to be peace in our lifetime.

Nice argument Yaacov. However, I suspect that Asael Street would be widened to accomodate a border wall. This would involve the demolition of homes along its length. However, as this is a microcosm of the larger problem, then we needn't worry about such logistics. It would be easier to unscramble an egg. Withdrawal back to the Green Line in Jerusalem won't happen voluntarily.

Asael st. IS the Green Line.

I don't want to get into Yaacovs basic argument_I don't live in Israel.
However, arguments based on boundary problems would not change anything-there are boundary commissions worldwide that deal with such issues see eg US Canada International Boundary Commission.
The fundamental arguments of Yaacov are very legitimate-the many examples that he has shown about difficulties of partition would be dealt with under laws of eminent domain and buying off a few houses etc-no different than building a highway or Light Rail System.

If you had a name, or even a nickname, it would be easier to relate to you.

A few houses: I estimate it would be more like a few thousand, given the way the putative line snakes through Jerusalem. In the Old City - one of the world's oldest - it would mean destroying a significant chunk of the city.

The US-Canada example is totally inappropriate. There hasn't been a war between the US and Canada ever, in the few centuries of their existence (unless you want to include the mid-18 century war between England and France).

Not to mention that once the division happens, it is likely to create more tension and warfare, not less, as I've often explained, and for reasons which have nothing to do with the specific line, rather with the tremendous frustration the partition would create. 270,000 Palestinians losing social security and health insurance, as a starter.

Is this the street where the car was stoned recently?

If you had a name, or even a nickname, it would be easier to relate to you."

"A few houses: I estimate it would be more like a few thousand, given the way the putative line snakes through Jerusalem. In the Old City - one of the world's oldest - it would mean destroying a significant chunk of the city."

"The US-Canada example is totally inappropriate. There hasn't been a war between the US and Canada ever, in the few centuries of their existence (unless you want to include the mid-18 century war between England and France)."

War of 1812-in which US burned York aka Toronto to the ground and in response the British burned Washington.
US War of Independence when US tried to capture Quebec

"Not to mention that once the division happens, it is likely to create more tension and warfare, not less, as I've often explained, and for reasons which have nothing to do with the specific line, rather with the tremendous frustration the partition would create."
Agreed

"270,000 Palestinians losing social security and health insurance, as a starter.

April 24, 2011 9:10 AM"
Not the real issue the US would pay the amount to solve what it perceives as its Mideast problem-they are probably wrong but essentially all US administrations have felt that way.

my German garbage gets collected only every two weeks ...
what luxury you live in, you have to provide no interim storage for your garbage, it is taken away almost immediately after you throw it out
wonderful!