A century ago Beit Safafa was a village in the hills north of Bethlehem and south of Jerusalem. By the time the British Mandate ended, in 1948, the southern neighborhoods of Jerusalem could be seen on the slopes to the north of the village. When the war of 1948 was over, there was an armistice line running straight through the village, the northern part lying in Israel, the southern part in Jordan. Over the next decade or so, the fields between the village and Jerusalem filled with the neighborhoods of Katamonim, populated mostly by Jewish refugees from Arab countries; eventually the Jewish homes of Pat were erected right next to the Arab homes of northern Beit Safafa. 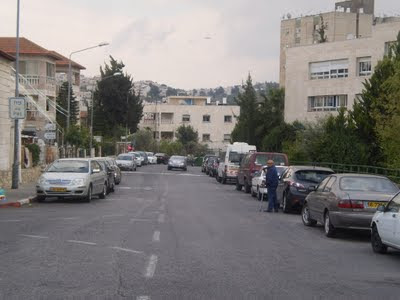 Pat on the right, Beit Safafa on the left.

During this period the border was sealed. Family members living a stone's throw apart could shout to each other, but never meet, never break bread together, never share family events.

In 1967 the Israelis occupied the West Bank and annexed East Jerusalem. Beit Safafa was united. The villagers were united, too, and over the coming years they multiplied and moved, some crossing the old and forgotten line into the Israeli part, some building larger homes on the hill to the south, which, I remember, used to be mostly empty and now no longer is. 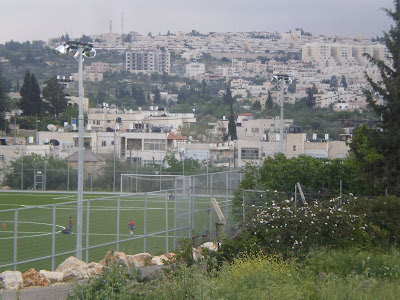 Of course, if you know Jerusalem, you'll recognize that the neighborhood on the top of the hill is Gilo, which much of the world calls a settlement since it was populated by Israeli citizens beyond the line of 1949-67. The odd thing is that in all the endless verbiage on the matter, no-one (NO ONE) ever calls the Israeli Arabs from Beit Safafa who moved in the same direction, settlers. Yet it can't be that Jewish Israeli citizens who crossed the Green Line to settle are illegally forbidden settlers, while the Arab Israeli citizens who did the exact same thing are not. That would make international law explicitly racist and antisemitic, and for all its silliness, it isn't those.

(If we're splitting logic, by the way, it would be interesting to know how American or Russian or French citizens who moved to the area after 1967 can be regarded as internationally forbidden. Merely because many of them took on Israeli citizenship along the way? And if they didn't? Say some of them retained their original citizenship and never acquired Israeli citizenship: are they also forbidden by international law? There are such people, you know. I recognize this sounds silly, but so does the entire construct if you think about it long enough or observe its details close up).

In the decades since 1967 thousands of Israeli Arabs from elsewhere - Nazerath, Jaffa, Sachnin and so on - have moved to Jerusalem. It's a big city, it's got the country's largest university, it's got hospitals, government ministries, and all sorts of other things to encourage migration. Some of them have moved to Beit Hakerem or Rehavia, and that's all right. Others have moved to Beit Hanina, a wealthy area on the city's north side, so they're clearly legally forbidden settlers. Some have moved to Beit Safafa, because it's the one part of town that already had a community of Israeli Arabs and it felt hospitable. Of course, if they moved to the northern part of the neighborhood (it has long since ceased to be a separate village), no problem. If they moved to the southern part however, they're illegal settlers, as we've already seen. The thing is, when you walk through the neighborhood, there's no way of recognizing which it is, unless you happen to be old enough or savvy enough to remember where the long-defunct line ran. Most people aren't. Most people, that is, except for the teeming millions who know that Jerusalem must be divided. 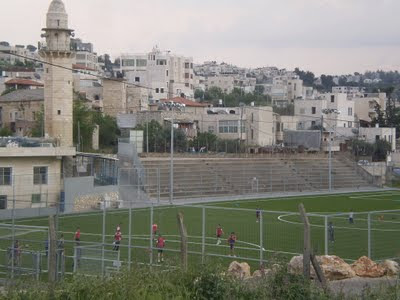 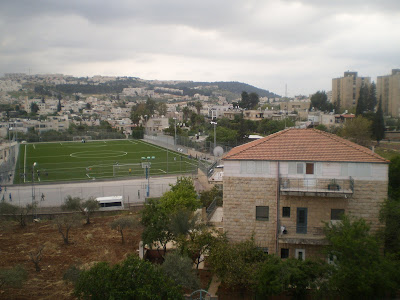 So let's get this straight. According to conventional wisdom, the buildings in the forefront of the picture below remain in Israel no mater what, since their denizens are inside the Green line and they're Israeli citizens anyway, except for the ones who aren't. The buildings in the center of the picture must become part of Palestine, since their denizens are outside the Green Line and they're not Israeli citizens, except for the ones who are. Then the buildings on the top of the hill, at the back of the picture, they will remain in Israel since they're part of the Jewish neighborhoods constructed since 1967 which will not be dismantled since there are more than 200,000 people living in them. Of course, the line between the two parts of Beit Safafa doesn't exist on the ground, and in some cases runs through homes constructed since 1967, and the line between Jews and Arabs near the top of the hill runs along garden fences and between parking places on common roads, but hey, don't confuse us with such minutiae. 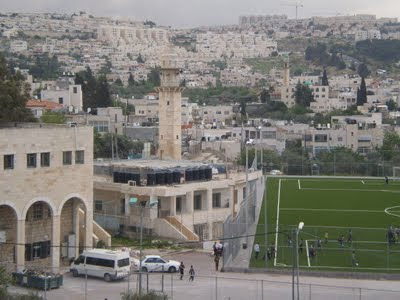 So now we've got the following situation. There are about 16,000 people in Beit Safafa. Some have been Israeli citizens since 1948, but they'll move or stay depending upon where they live now. Some have become Israeli citizens since 1967, but that's immaterial. If they're Arab (they are), and they live south of the Green Line (many do), they obviously yearn to live in a free Palestine, not Israel. No? Some are not Israeli citizens, merely permanent residents, but if they live north of the line, they can stay put, or move to Haifa, or move 25 feet to the south, and thus choose to live in whichever country they prefer. And then of course there are the non-Israeli citizens who moved in 1974, or 1983, or 1992, or 2001, or whenever it was, to Haifa or Kfar Kassem or elsewhere in Israel, and they won't be affected in any case, since they're inside the Green Line and thus impervious to the entire discussion. It's only Jews who are on the wrong side of the line who need to do any explaining or accommodating.

In case you're skeptical that anyone would really consider drawing all those lines, here's the map as it appears on the website of the Geneva Initiative. I'm not making up any of this. 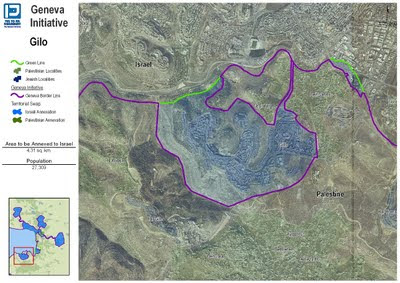 Post script: My friend Sami (false name), who lives elsewhere in East Jerusalem, tells me many of his neighbors are envious of the Beit Safafians: "They or their cousins have been in Israel since 1948, and they know how to navigate the system in a way the rest of us don't always know."

I completed this series of articles about how Jerusalem can't be divided with two posts relating to the question if the city's Palestinians even want to be divided away from Israel. Here I explained why they may actually not want to be divided, and here I showed a little snapshot showing the same.
Posted by Yaacov at 4:26 PM

Yaacov, Thanks for the outstanding post. It never ceases to amaze me that you are the only one doing this sort of thing.

On a personal note, my father studied at Hebrew U in the 60s, before 67. He had an Arab classmate who lived in Beit Safafa(Israeli side) and my father would often go visit. This classmate had a brother, who my father remembers as very unfriendly.

In the wake of the Six Day War another one of my father's classmates wrote to tell him that a weapons cache had been found at the house and that the unfriendly brother had been arrested by Israeli Authorities.

My father's classmate went on to become a well respected academic.

below is the transcript of a radio-piece I heard today about "Breaking the Silence" and when it came to the part on Hebron I started wondering why a big? city can't live with 800 (eight HUNDRED) Jews living in it. It is presented to me as a fact of nature and that the other Hebronites are suffering because of those 800 Jews living in there.

I know nothing about the history of Hebron and I am not really interested in how it all came about I am just outraged at the fact that it is a given that it can't be expected of a city to tolerate 800 Jews while at the same time I am constantly asked to show special respect/tolerance/welcoming for my Muslim Co-citizens.

Why am I supposed to do the one thing, while the people of Hebron are pitied for being kept from kicking those 800 Jews out of the city?

Also inhabitants of other big cities are expected to go on with their lives with no-go-areas here and there and everywhere and they seem to manage that also i.e. even assuming those 800 Jews are very unpleasant neighbours still a modus vivendi would be found everywhere except when an Arab is supposed to get along with a Jewish neighbour?

Are there different principles for different societies?

The Israeli Far Left imposes conditions only on the Jews - never on the Arabs.

But the people who will suffer if they ever get it their way in Jerusalem, G-d forbid, will be the Arabs, not the Jews.

"et it can't be that Jewish Israeli citizens who crossed the Green Line to settle are illegally forbidden settlers, while the Arab Israeli citizens who did the exact same thing are not. That would make international law explicitly racist and antisemitic, and for all its silliness, it isn't those."

You're kidding, right? When it comes to Jews, it certainly is. You need to make a lot more noise about the Beit Safafans, because not one person in a thousand talking about "those horrible Israeli settlers" knows that some of them are Arabs. We all ought to be asking pointedly if the settler-removal project is going to apply to the Arabs as well as the Jews, and if not, how do they justify such overt racism?

Thank you, Mr. Lozowick. Thank you for articulating the folly of dividing a three thousand year old city simply because Jordan occupied the eastern half of it for 19 years. The ignorance and hypocrisy of much of the world regarding this issue is truly staggering.