As the dwindled number of readers of this blog know, these days I steer firmly away from the political discussion which used to be its main preoccupation - a price of being a civil servant. Today I'm going to try sailing close to the wind without stalling, so a word of explanation. In spite of the way it might seem, I"m not stating a political opinion of any sort here, not staking a position on the rights or wrongs of matters which are debated by various political parties. Rather, I'd like to comment on the structure of the Israeli-Arab conflict, irrespective of any specific proposals to resolve it.

In recent months I've had the occasion privately to discuss the efforts to obtain peace with a number of unusually well-informed observers of the conflict. Each of them has been American, Jewish or not; each of them has impressive command of the details and minutiae of the historical chronology and familiarity with the important and secondary historical and contemporary actors. Unlike the vast majority of pundits, these fellows (they've all been men) know what they're talking about.

Yet I've found the exact same chasm between my understanding of how the story could unfold and theirs; it has become clear to me that this difference is itself interesting and significant. In a nutshell, the issue is about the finality of peace agreements.

American history is probably unusual, in that the United States has rarely experienced anything resembling permanent conflict. The last time there was a war between the US and Canada was in the 18th century, when they weren't yet the US or Canada. The last war with Mexico was in the 1840s, two centuries ago. There were two rounds of war with England, both long ago (ending in 1812). There was one round with Japan, one each of the various little wars the United states has engaged in, two with Germany followed by uninterrupted peace. The single worst conflict the US ever had, its war of the 1860s, was a one-time affair; indeed, a century later there was a second round of sorts, which played out with great drama, some violence, and no warfare whatsoever. And of course, the long conflict with the native inhabitants of the continent was resolved by their effective disappearence.

You could forgive Americans for the idea that conflicts are fought resolved and ended, to be continued, at very worst, on non-military fields. Indeed, such historical optimism probably lies under the widespread receptivity to books such as Steven Pinker's The Better Angels of Our Nature: Why Violence Has Declined

. Pinker, of course, doesn't limit himself to North American history. His theses is that humanity as a whole is weaning itself of violence on all levels, and the Long Peace of post-WW2 Europe and the New Peace of much of the rest of the world are permanent; the rest of humankind simply has to catch up and calm down.

A perceptive reading of Pinker, however, ought to remind us of the simple fact that throughout most of history, peace agreements at the ends of wars were temporary affairs. When one side destroyed the other, they could last for centuries; but when both sides remained standing, they often returned to battle sooner or later, in the same configuration or in a different one. The Bible aspires for "forty years of peace", which is a reasonable approximation of "permanent".

Pinker's conception rests on more than the statistical fact that since 1945 there have been (almost) no wars in Europe and that at the beginning of the 21st century there are fewer conflicts than usual worldwide. He shows how multiple things have changed, so that nowadays people don't regard war-making as an option for resolving conflicts.

But there-in lies the rub, as I pointed out when I recently reviewed his book. In order for a peace agreement to be the prelude to lasting peace, it must obviously be fair enough that all sides prefer it over the continuation of conflict, and more important, the vast majorities of the populations must cease to regard war as an option. These are two very different things.

My thesis here is that the people striving for peace between Israel and Arabs are working hard at attaining the first, while assuming that the second will necessarily follow. This assumption, however, makes sense only if something has changed in the character of the peoples involved. If Jews and Arabs (not only Palestinians) have together reached the same stage of history the nations of the Long Peace have reached, then indeed, a peace agreement between them is likely to usher in a permanent Middle East Peace.

Must I elaborate on how utterly silly that is, in 2013?

I'll close on the point I began at. I am not advocating for or against any particular proposal to create agreement between Israel and Arabs. Since my children all live here, I have the greatest of interests in their living in peace. What I am saying is that the peace makers need to be striving not for a magic combination of gestures and moves on the ground which will call forth a peace-signing ceremony on the lawn of the White House. They need to be creating a new reality. If all they achieve is the goal of an agreement without changing the essentials, they will have created an interlude in the conflict. At worst, they might even create the motivation for the next round.
Posted by Yaacov at 6:26 PM 5 comments:

It's been a long time since I did a "Shirim Ivri'im" post. (The thread was introduced here, and the whole series is tagged with the "shirim I'vri'im" lable). Well, last week we went to hear Idan Reichel, easily one of Israel's most talented and popular musicians, at Cesarea, where there's an open-air theatre built by the Romans about 2,000 years ago. I don't know how large the crowd was - five thousand, perhaps. There were grade-school kids there, and retirees, and everyone in between. Reichel and his group pun on a wonderful show as usual with him, the music was very diverse. Here's an i-phone recording by someone who was seated close to the stage. The quality isn't particularly good, soory, but if you listen carefully you'll see that, yes, the lyrics and the music are... Arabic.

Israeli society is more complicated than it's made out to be.


One of the more touching songs was Maya Avrahams rendition of Ya Mama. However, since I can't find a Youtube version of reasonable quality, here's a recording of the same popular song by Shimon Buskila.


And since we're on the topic of Reichel's multi-lingual recordings, here's one of the most famous of all
Posted by Yaacov at 6:35 PM 1 comment:

It's on Mount Zion, but I doubt that will help. 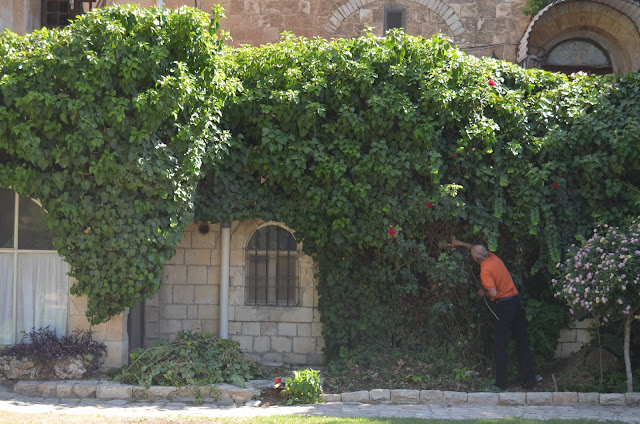