I'm shutting down this blog. In a moment I'll explain a bit about why, and what might come next, but first a word about what's still here.

Blogs are a very ephemeral type of writing. No-one reads old blog-posts, or entire blogs from cover to cover. They can be a useful way of saying immediate things, but they're not very good for saying anything of lasting value. Indeed, most of what I've written here these past four years hasn't been durable. Some bits, however, perhaps have, or so I'd like to hope. These parts I've now collected in a short series of pages, listed at the upper left corner of this screen. There are three such series:

At Don't Divide Jerusalem I've collected links to the 15 essays I wrote explaining and demonstrating why I think the idea of dividing Jerusalem is a travesty which, should it ever be implemented, will be the root of the next war.

At Seeking Peace, Living at War I collected the dozen or so essays about war and peace which I hope will have some value for readers who might stumble upon them even well after they were written.

At Jewish Culture, Israeli Culture I told about the Daf Yomi series I ran here, and about the Shirim Ivri'im one.

Regular readers will have noticed that I've been uneasy with blogging for quite a while. The reason I'm desisting precisely now is that I seem to have been offered the job of Israel's State Archivist. The appointment is not yet official, and the way these things work, it shouldn't be regarded as final until it does become official, but even were it to fall through I wouldn't continue with blogging in the present form. Assuming the appointment does come through, however, I obviously can't be both a civil servant and a political bloggger.

What next? Well, mostly I expect to be engaged in that new job, which includes some very large challenges. Alongside it, however, I intend to continue with the researching for and writing of a book about Jerusalem, the living city that it is, rather than the historical city it as been these past 4-5,000 years - though of course, the present city is also the historical one - very much so. One of the nicest things about blogging is that I've had the opportunity to listen to intelligent people as they responded to the thoughts I've been spewing. I've been wondering if it might be feasible to have a website where I put materials, thoughts, ideas, pictures and general stuff that I'll be collecting (and discarding?) along the way towards writing that book. Professors use their students as sounding boards for the emerging drafts of their research; perhaps a website could do the same? So I've put up a provisional site, over here. It's not supposed to be a daily blog, and Im not certain what it will evolve to be, but if you're interested, feel free to come by from time to time.

Another idea I've had is connected to the archivist position. The State Archivist does various things, including being the head of the national archives, and also the professional head of the entire field. This means he can acquire a good idea about what Israel's various archives have, and what stories they tell. Perhaps, if I find the time, I'll set up a blog that reports on interesting documents from our many archives. Perhaps.

I remain on Twitter, @yaacovlozowick, and whenever I feel I've got an announcement to make, it will happen there. Should I someday return to something resembling blogging, in this format or any other, for example, I'll tweet the momentous news.

Finally, I wish to thank the many readers who followed this blog, those who identified themselves and joined the discussions, and the many who never did. I appreciate the time you gave me.

In the summer of 2005 America and Europe wanted Israel's disengagement from Gaza to be complete. It was really important to them. So by way of convincing Israel there'd be no danger in opening the border between Gaza and Egypt, everyone signed a treaty. The Americans signed, the EU signed, Egypt signed, Israel signed, and the PA signed. The treaty described how European professionals would watch the movement of goods and people in and out of Gaza, and they'd be nice to the Palestinians but also protect Israel's interests.

Then, about six months later, Hamas won the Palestinian elections and it all started unraveling. By the time Hamas violently threw the PA security forces out of Gaza, nothing was left of the treaty. This week, less than six years later, a new Egyptian regime (a temporary one, perhaps) opened its border with Gaza, and no-one even pretends to respect the defunct treaty, nor to care.

Meanwhile, far away in Africa, Sudan is using military force to change its border with the emerging country of South Sudan. If you look hard enough you can find mention of this at well-informed websites such as the Economist; the Guardian has even mentioned it repeatedly (here, here, here and here). So far as I see, words such as "illegal according to international law" or their synonyms don't make it into any of these reports; though here's a blogger who's pretty explicit about what's going on. A blogger. At one point the Guardian does use the term "disputed territory", however, thereby demonstrating that there's at least one keyboard in their system that has the keys necessary for such words.


Just another example among many that international law may be useful when peaceful democratic states suchas Iceland and Britain need to resolve disagreements about fishing rights in the Northern Atlantic, but it's useless when coping with international conflicts.

My point, of course, is not to bemoan the irrelevance of international law; on the contrary, my position is that international law needn't be brought into armed conflicts in the first place, not as a tool for resolving them. The mere fact that they're violent proves that at least one side is willing to kill so as to promote their interests, so why would they be frightened off by some words in a dusty book on a shelf. National interests are what makes international relations happen, not laws.
Posted by Yaacov at 3:36 PM 3 comments:

And comes back with an unsettling report. 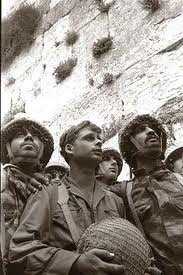 Yossie Klein Halevy writes about Israel's most famous picture (The article was published four years ago. Today is the 44th anniversary of that day, by the Jewish calender).
Posted by Yaacov at 12:12 PM 1 comment:

Photographs which Say the Opposite

Michael Totten recommends an essay by Walther Russel Mead, who claims that America very much won the war in Iraq. Personally I think it's still too early to know, but I"m glad such a compelling and cogent argument can be made; it wasn't long ago that anyone who didn't regard the American war in Iraq as total lunacy, was assumed to be a lunatic themselves. Perspective will make the picture look different.

Michael then links to a weird collections of photos from North Korea, by Charlie Crane. Crane was allowed into North Korea to take pictures, but only the pictures his minders permitted. So he turned the tables on them by taking only pictures they'd approve of, and presents them to us confident that we'll see what he saw, not what they saw: even though it's all the same pictures. Genius. One of Michael's readers then suggests another website that does something very similar: it takes official pictures of Kim Jong-Il, adds a very thin layer of ridicule, and suddenly the pictures say the opposite of what their creators intended.

Both websites use our conditioning as citizens in democracies, to turn totalitarian photographs on their head, without tampering with the photos themselves in any way. Fascinating.
Posted by Yaacov at 12:30 AM No comments: