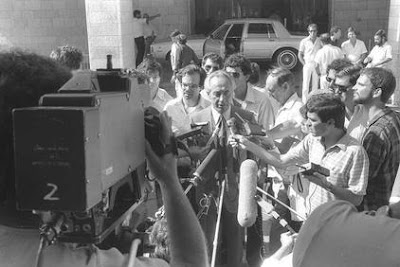 I don't write much on this blog anymore; when I do it tends to be about impersonal matters. Israel, books, stuff. This post is very personal, but it's important enough for to put somewhere.

It is overpowering. Overwhelming.

While I think I've encountered parts of it in the past, this was the first time I ever listened to it. Now that I'm consciously aware of it, if it's ever played at a Jerusalem theater I won't go. Who could sit in a hall full of people and publicly listen to such a piece of music?  The danger of losing emotional control in the presence of all those strangers would be too great.

So I did a spot of googling, and came upon this website. And on the website I found this picture: 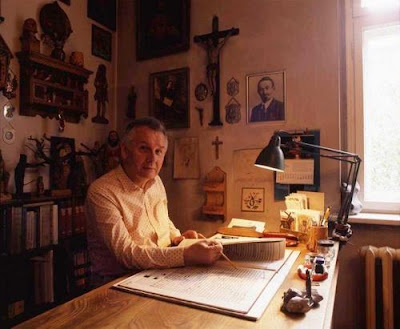 Where I grew up, Polish people were suspect of having been nasty to Jews. Crucifixes were not suspect, they were known with certainty to have been wielded with fury by pogromists or with hatred by inquisitionists. Poles with crucifixes were, at best, to be avoided.

That was half a century ago, but childhood rumours are generally more powerful and rooted than much of what we pick up later.

Yet listening to that soul-arresting music, looking at the Pole sitting in his room full of Catholicism was profoundly comforting. There's a connection between his religion and his soul and his ability to create music that touches my soul. In a world awash in rampant soulless secularism, arrogant ignorance, rabid relativism and all-conquering vacuity, here's a man who sat under a wall of crucifixes and achieved transcendent beauty which touches eternity.

Update: It turns out that Gorecki explicitly tied his symphony to the Polish history of the 20th century in general, but also to Auschwitz in particular; and that the three sorrowful songs are between a mother and her son and daughter, perishing in the maelstrom. Here's a recording of the symphony interspersed with takes of Gorecki himself, wearing a heavy homey sweater.