Here's the picture that should explain all.... But it doesn't, does it. Ah, well. 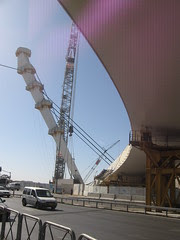 Santiago Calatrava has been commissioned to build a bridge in Jerusalem. Admittedly, there are no rivers in Jerusalem over which to build a bridge, so the bridge will carry the new municipal train over the road into town at the entrance to Jerusalem. The idea is that the Thingy will grow to twice it's present height, and then steel cords will be hung from it, and the bridge will hang on them. If Jerusalem didn't already have far more than its share of unique world-class tourist attractions, this will be another one.

Unconvinced? Don't understand what I'm talking about? Well, you'll just have to keep visiting this blog to see the next installments, as the thingy rises higher and eventually becomes a bridge. And when your grandchildren someday assume that the Calatrava bridge in Jerusalem was always there, you can send them to the (by then defunct) Lozowick Ruminations site, to see pictures of the bridge during its construction.

This picture was taken from underneath the bridge, looking up.