The Funniest Picture Ever 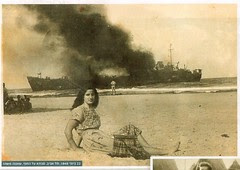 Her grandaughter found the snapshot in a shoe box a few years ago, and sent it to Haaretz recently in response to their call for pictures of ordinary Israelis in the national epic. (I can't find the link on www.haaretz.com, which says something about their website and its user-unfriendliness).

The commotion in the background, distracting us from how pretty Miriam is? Oh, that's the Altalena burning. One of the most dramatic events in Israel's endless series of dramas. One of the most formative events in more than a century of Zionism. A day on which Israeli soldiers fought Israeli irregulars with casualties on both sides, with the five-week-old state of Israel as the undisputed victor. A day such as the lack of which has damned the Palestinians to generations of suffering, and the Lebanese too.

It was also the day Miriam managed to get her picture taken on the beach.
Posted by Yaacov at 9:57 AM

I recently saw a book of pictures from 9/11, some of which were photographs that the photographers haven't released until now. One of them show a bunch of friends sitting on a Brooklyn rooftop, lounging around and talking, with the WTC burning in the background. There were a number of similar pictures, and the photographer wanted to wait a number of years before showing them to the public.