Ghosts - and the World that Moved on

September 1st, 2008. The weather is beautiful here in Warsaw, probably the best we've seen in the 9 days since we arrived. It's the 69th anniversary of the German attack on Poland that began World War 2, or at least the European part of it. No sign of this on the streets of Warsaw, so far as I could see. Apparently Polish high-schoolers go to their first day of the new school year dressed in finery, or so it seemed on the tram and the main thoroughfares. I did briefly note a black-and-white film on Polish TV earlier, with a plane dropping bombs, so some people have noticed the date even if by now you have to be elderly in order to remember the original event itself.

In previous posts I've mentioned the Stalinist monstrosity that stands at the very center of Warsaw, straddling the line of the Warsaw ghetto at its south-eastern corner. Here's a picture of it, followed by some ruminations. 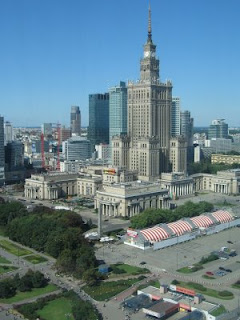 First, when it was built it wasn't intended to have all those glass-and-steel capitalist skyscrapers behind it. Nor was it supposed to have that red-and-white roofed structure in front of it, that contains a supermarket and dozens of small stalls that sell perfume, sports shoes and fired chicken. The parking lot in front of the supermarket also wasn't envisaged by the architect. Come to think of it, the advertisement placards hanging on the facade were not foreseen, either.

The Nazis who invaded 69 years ago today also foresaw none of this, although they were the ones who razed all the previous structures and created the large empty expanse Stalin then used. To their real credit, the Poles are busy overcoming their nightmares and are getting on with life.

If you focus on the street to the south of the monstrosity, there's also an interesting story. It's called Jerozolimskie Avenue, and you can't get any more central in Warsaw than that. But back in the 18th century it was a few miles to the south of the city. Jews had been banned from the city for about 250 years, but in the mid-1770s, just as the English colonists in Massachusetts were throwing teabags into the port of Boston, someone allowed Jews to settle in the fields to the south of town. A few years later he changed his mind and threw them out, but in the meantime their nickname for the road leading east from their settlement had stuck, and remains to this day Jerusalem Avenue.

You cannot tell the story of Poland without telling about its Jews. You can't even go to the central train station.

A few minutes walk to the north, not more than one block away from the Stalinist billboard for beer, the ghosts still reside. 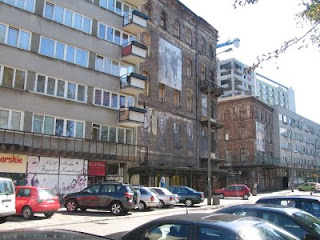 On the left, a bland residential building. In the top right hand corner, a new high rise going up, with a crane above it. And wedged between them is a ghost from the past. 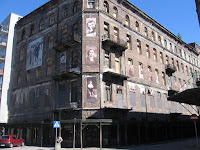 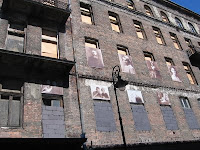 Two buildings that somehow were still standing after the ghetto was destroyed, and are standing still, to this very day. Too fragile for anyone to live in, of course, so the windows are blocked. The ghosts, however, are still there, and haunt us from the dead windows and the bare brick walls. 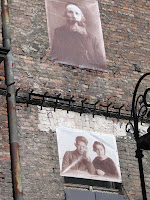 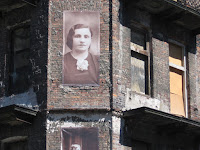 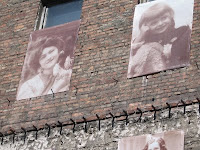 Daniel Pipe's father escaped Poland, around 1937. Was he even 17 years old? From memory, his father was able to get out. I think they went to Italy.

What I do know is that Richard Pipes, Daniel's father, was a professor at Harvard. And, he served in Reagan's first term. One of the few professors who actually functions. (Mentioning in his autobiography that most professors are good at thumb sucking. And, very poor at giving decisive information.)

I loved his autobiography, by the way! And, then, I read his recommendation that Poland had been wonderful to Jews. It wasn't "wall-to-wall" Holocaust. Though, yes, the Catholic Church has never stepped forward and taken responsibility for it's wackier teachings.

Turns out you can use religion as a way to slaughter "outsiders." And, today, Islam is repeated what the Europeans have already shown: They grew weaker as a result of WW2.

Anyway, Richard Pipes recommended a book by a Pole, that discussed the centuries Jews were in Poland. And, they thrived. (I've been looking for this book on my bookshelves; but it hasn't turned up, yet.)

Basically, the story starts off in 1492, when Spain "ethnic cleanses itself of Jews. Again, you'll notice the heavy hand of the Catholic Church, here.

All of 750 people arrive in Poland, at that time. That's the start of what would be a place Jews would thrive.

It was Pipes' idea that we should familiarize outselves with this part of our Jewish history. And, not just read the Holocaust as if it canceled all else out.

Both my parents were Polish. My dad lost his sister, her husband, and their three boys. America's doors were shut to their immmigration. Basically, my dad said his sister was illiterate. And, you could no longer get to immigrate to America, during the 1930's. When America had a Great Depression. And, very isolationist Congresses.

Part of the reality of history is to know Churchill and Roosevelt, together, decided Hitler needed to be stopped, and that's the way the war efforts were concentrated. Did good people do everything they could? NO.

Could England have lost the war? Yes. Churchill was alone, with FDR refusing to commit to the European fight. For Churchill, England declared war in 1939. America didn't enter the war until after Pearl Harbor, December 7, 1941. And then? Declaring war, and actually getting started with an army overseas, and getting up to speed, took until July 1942. England was basically bankcrupt. Except for "lend-lease" ... there was no money in the British treasury to afford the ships and powerful munitions she needed.

Churchill understood FDR's politics. He couldn't just declare war. What with "Barton, Martin, and Fish, in the Congress!

And, what plays out inside legislative bodies looks more like sausage than pure reason.

I wish I remembered the name of the book Richard Pipes recommended to people to read. However, I do remember the message! He said Poland had a record in place where the Jews there thrived.

Let's not throw out the baby with the bathwater.

To learn from history you need to be open to the very complex nature of mankind.

Who is Carol Herman?

Just trying not to be annonymous when I leave a comment. Meanwhile, I'm 68 and retired. And, am an American citzen. Jewish by birth.

It's one of the "flaws" of the Internet that you have no idea who offers opinions.

And, I don't know "annonymous" from a hole in the wall.

Adding my name, just means I'm willing to sign off on what I write.