The Economist has an article this week about how Obama is about to enable stem-cell research in the US. Thus, the paper tells us, American scientists will now join colleagues in seven other countries who are already performing such research: Australia, Britain, China, the Czech Republic, Israel, Singapore and South Korea. An illustrious list, I'd say, and a short one. There aren't many countries in the world which have scientists trained and capable to engage in this potentially revolutionary life-saving and life-improving research; Israel is one of the few. Do you suppose the boycotters of Israel and divesters mean that what they say? Do you think they understand what they say? Do you think they care?

(One of the more comic aspects of the boycotters is their touching belief that Israel will be brought to its knees by their not buying tomatoes).

Allow me to wander a moment: I'l be back on message by the end of the post. 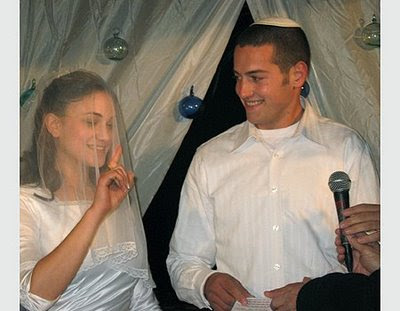 That's a picture from Aharon Karov's wedding to Tzvia, about three weeks ago. Less than 24 hours later he was called to his infantry unit and sent to Gaza; a week later he was critically wounded in battle. His wife and family were called to the hospital in Beer Sheva, and informed he probably only had a few hours left to live.

Earlier today he was released from the hospital. Not home yet, rather to a convalescence unit near Tel Aviv, where he probably still has months of hard work ahead,and maybe years of lingering effects. But he's out of the hospital, and the doctors say his brain was not injured in spite of the head wound he sustained. Here's the Ynet report, which is in Hebrew, and includes a video. By most criteria he looks pretty bad; he can't talk, he's in a wheel chair, he has ugly scars all down the side of his head. I expect 40 or 50 years from now, as he approaches old age, he'll have health problems his peers won't have; he'll also have children and grandchildren to support him, and colleagues collected throughout his long career. Not bad for someone who gave his life for his community, and had it given back at the very last moment.

The doctors say it was a miracle. I don't know how to measure miracles. Lot's of people have been praying for him, but I don't know how to measure prayer, either. I do know, however, that he went off to defend a country that has world-class doctors and hospitals, who are committed and equipped to save every life they can even when it looks hopeless. That's one of the reasons - not the only one, but an important one none-the-less - that there are comparatively few Israeli casualties in our wars: we've invested gazillions in the ability to save lives. The Palestinians, alas, have different priorities.
Posted by Yaacov at 10:51 PM

As a scientist and committed agnostic, I must say it is stories like this that make me wonder.