The other day I had a meeting in a part of town I don't pass through on a regular basis. While passing through this time, I saw a campaign poster (actually two torn ones side by side) geared for voters who care not one bit about the issues you were led to understand were the ones they were supposed to be interested in. So here's a picture, then a translation, then a de-coding. 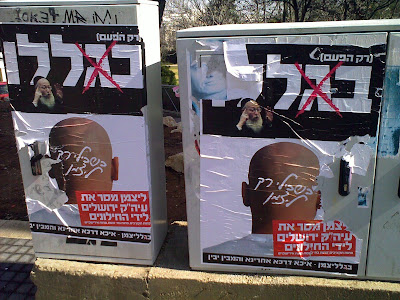 Translation:
(Only this once)
Because of him (picture of an unnamed Haredi fellow)
(picture of a skinhead, and superimposed the words) For me only Litzman
Litzman handed over the Holy City of Jerusalem to the seculars
[little letters]: Fewer funds fewer synagogues less Yiddishkeit
[in Aramaic]: because of Litzman there's another way and the clever will understand

Ah, and the letter gimal is crossed out from the word biglalo, because of him.

So far the translation. Any readers of the NYT, say, or any other media outlet, who might have any idea what this is all about? No?

It's actually rather simple. Litzman is representative of the Gur hassids in the Aguda party which runs under some other name. Voters in Israeli elections cast a vote with a slip of paper with a letter, a throwback to the early 1950s when not everyone could be expected to read long names in Hebrew (or Arabic, for that matter); Aguda's letter is Gimal. Back in November the Gur people refused to vote for the candidate of the Aguda in the Jerusalm municipal elections, thus contributing to the victory of the secular Nir Barkat, may the Lord protect us, especially as secular folks are hardly to be distinguished from skinheads. I don't know what place Litzman was on the Aguda list last week, but apparently some Haredi folks are so angry with him for reducing the municipal pork (I really do apologize for the word, but that's how you say it in English) that they're willing to vote elsewhere.

But not any old "elsewhere", of course. Which is why that last sentence in Aramaic tells them where to go: to Shas, of course. But only this once, of course, as the top sentence says. By next time we'll have gotten rid of Litzman and Barkat and Shas. And the skinheads too, god willing.

Did any of this make any difference? I doubt it. United Torah List (Aguda) got 5 MKs, Shas got 11, neither of them doing better than last time - actually, a bit worse. But as folklore goes, it's cute, isn't it?
Posted by Yaacov at 3:25 PM