So, although I didn't vote for Netanyahu nor any of the parties that make up his rather improbable coalition, and I'm not convinced his government will successfully run this country for the coming four years, I hope it will. And if it does, I'll vote for him next time.

In the meantime, here's a statement that's making its rounds in cyberspace regarding one of the key figures in the new government; for those of you who are hebraically challenged, the pun is that the Hebrew word for cabinet minister is Sar, which rather rhymes with Czar. 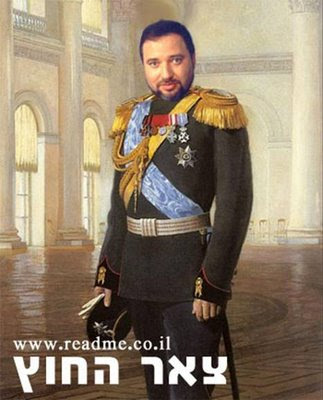 Update: AP has an article about Netanyahu's new government which also sorts of takes a centrist line: maybe this time he'll be alright.
Posted by Yaacov at 12:18 PM