I don't know much about Pat Oliphant, a Washington Post cartoonist. Abe Greenwald at Contentions intimates he's a fellow with a record, tho Greenwald doesn't think that exonerates anyone. Personally, I'm more interested in the top editors of the Washington Post, perhaps the second most influential newspaper in the United States, for allowing this on the pages of their paper: 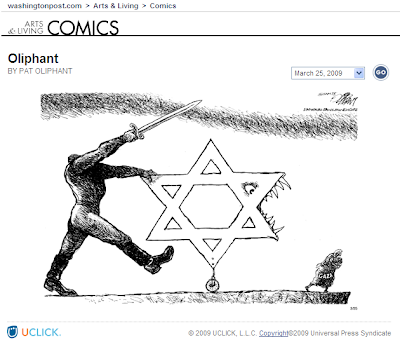 As Meryl Yourish adds, it's a version of the Israeli flag. Do you suppose Ari Roth would say that means it's art, and thus not to be evaluated for its truth?

They're not good days, these ones. Sure, our descendants will dance on the graves of these hate mongers, if they can find them in the dust, unless they're distracted by the antisemites of their own generation, but knowing your enemies will fail doesn't make them more palatable.
Posted by Yaacov at 11:06 PM

Email ThisBlogThis!Share to TwitterShare to FacebookShare to Pinterest
Labels: Antisemitism, Media on Mideast

I blame Obama for this. He's setting the tone and he's setting it very clearly. When he indicates in a press conference that a Netanyahu gov't "doesn't help" the prospects for peace, among a score of other more and less subtle things he's done in that vein, what possible reason can others have to restrain themselves?

Actually Bibi and Obama have a very good relationship. http://www.onejerusalem.org/2008/11/israels-reaction-to-obama-neta.php
But there are those whose hatred of Obama is so great that should he present a cure for cancer, they would complain that he is just increasing the population density. I know that you are not one of those people and will give him the chance to rescue the country from the Republican excesses and the world from Bush's excesses. And by the way, Bush has been no friend of Israel.

Sorry Joe. I trust what my own ears tell me.

This is the guy who promised to move the embassy to Jerusalem, to a standing ovation, then took it back.

He's the guy who said on Arab television that America, remember, was not born a colonial power (only Israel was, in Arab eyes - so he's saying Hey, We're Not Israel).

This is the guy under whose administration the Israeli chief of staff couldn't get a meeting with anyone.

He's the guy who pretended to be done with Samantha Power (actually over something she said said about H. Clinton but her comments on Israel have been just as shocking) and then brought her back in as soon as he was elected.

He more or less openly backed Livni in the recent election. That's less egregious than the other things, but again it sets the tone.

I don't think the Washington Post would have published a cartoon like this a year ago, not because their own biases were any friendlier to Israel then but because the political climate of the time would not have permitted it. That climate has changed, and there's only one place to look for the cause of that.

Right, Adam. We recently had a stretch of very bad weather and I'm certain that Obama was the cause of it.

If only there's someone to be blamed for! Shouldn't we know way better? I hate this Obama-yes/ Obama-no discussions. What about the context? Don't we know where that is coming from? Don't we??

here is a book presentation of Cass Sunstein's co-author for their book "Nudge ..." at the London School of Economic on March 23, 2009
http://itunes.apple.com/WebObjects/MZStore.woa/wa/viewPodcast?i=52220035&id=279428154
- Cass Sunstein is married to Samantha Powers and is or will regulate something in the Obama-administration http://en.wikipedia.org/wiki/Cass_Sunstein

and if you really want a nightmare imagine all these clever clever tricks applied to the "peace process"
rgds,
Silke

This is what I'm worried about. Israel faces a new reality in the US in which popular support for something like taking out an Iranian nuclear program cannot be assumed to always be there. It's there now, despite the administration, but the administration's attitude will force Israel to use this capital while it still exists.