The Most Typically Israeli Picture

The other day I linked to the short-list of pictures competing at Y-net for the slot of "Most typically Israeli picture, 2009", a competition between snapshots sent in by regular Israelis, and chosen by the regular folks at Y-net. Here's the picture that was chosen: 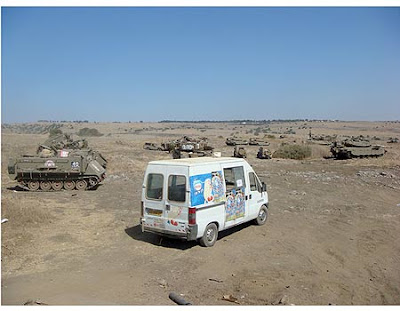 Should we talk about it a bit?

First, this was a popular choice, vox populi - not the choice of a small group of self anointed pompous cultural experts or celebrities or what have you.

Second, if you don't know what it's about, it's hardly self explanatory - which is probably the reason it was chosen. The voters in this competition were looking for a typically Israeli picture, and they chose one they felt to be specifically Israeli, unique to us. Fundamentally unfathomable to outsiders, actually, as Roni Shaked commented in his column, which was not translated. (Y-net isn't Haaretz - all the more regrettable).

Where's the picture from? It was taken by 21-year-old Yonnie Kot, a recently demobilized tank commander. He snapped the shot from his position in the turret of his tank, in one of two scenarios. Either he'd just parked the tank after a run of maneuvers, as his unit reached a resting point, or they were preparing to continue and the van appeared. I've been in that picture hundreds of times, as have most of us; Achikam, home for Independence Day, glanced at it and said "Classic! And I've been in that field!"

What's it a picture of? Of a gazlan, of course. What's a gazlan? Well, the etymology is pretty clear. GazLAN is the Hebrew word for a thief who steals in bright daylight. GAZlan is the fellow, mostly uneducated and with imperfect syntax, who does a roaring business selling hot dogs and ice cream to military units on maneuvers. Each maneuvering area has one or two of them, and they always know in advance exactly which unit will be where when and how to get there. The commanders of the unit may have spent the entire night navigating the desert so as to assault a specific dusty hill at dawn, peering at their maps (or GPS screens). Once they've shot their payloads and churned up the dust, they lead their unit over the crest of the hill to regroup before moving on... and there's the gazlan fellow, with no specially-fangled military maps and satellite navigating equipment, waiting with his over-priced merchandise to fleece the troops. And boy, are the troops glad to see him.

Yossie Beilin once told in an interview of a life-changing insight he had many years ago while on the field of battle with casualties not yet evacuated, standing in line at the window of the gazlan. Even accepting it really happened that way, he was presenting his all-Israeli credentials while suggesting his hardly-all-Israeli perspectives.

If Yossie Beilin so, certainly all the rest of us less enlightened proles.

Yet this isn't the full story. Roni Shaked notes that thousands of snapshots were sent in, so it must have been a far larger number who did the choosing. They could have chosen all sorts of pictures to celebrate their communal identity - heroic ones, aesthetic ones, national ones, even simply more interesting ones. The aggregate voice that chose this particular picture was saying something. That this is a situation we all recognize, and recognize as being uniquely us. That the army is an essential part of our communal and personal lives, but the civilian gazlan is a central part of it. That the military planners pore over their preparations, but the uneducated gazlan will always see through them. That we'd never pay gazlan-prices for a hotdog at home, but in the army we'll gladly fork out the money rather than survive off the fare supplied for free by the system.

On a profound level, the gazlan is an expression of cynical humor in a crazy situation that isn't humorous; his elevation to national icon reflects the combination of grim determination and irreverence about it, all rolled together. He's precisely not Brecht's Mutter Courage, trudging after the marauding armies, making a living off the destruction they wreak while losing everything to its maws. The gazlan as a metaphor isn't separate from the troops, a parasite off them: he's the better side of them, the reminder that soon they'll be on his side of the equation, the civilians making the best of a wacky situation - but then again, they won't, because soon enough they'll be back in uniform as reservists, paying outrageous prices for his wares.

PS. I've noticed my exhortations to know Hebrew if you want to understand Israel have become regular fare on this blog. It's not a mandatory requirement, of course, but if I can convince you, here's a rather painless venue - no travel required, so you're even saving the planet!
Posted by Yaacov at 12:29 PM

Lydia, YES. Ice cream truck to this American eye as well. I, too, appreciated the explanation. :)