A Long Time Ago, Today

David Brooks at the NYT does a better job than I did yesterday in explaining how Obama's Cairo speech wasn't about history, rather about a political attempt to influence reality. Of course, history will probably win. It often does.

One of the more significant historical mistakes in the speech was the idea that Israel is because of the Holocuast. This isn't exactly what Obama said, but he explained to the Arabs the centrality of the Holocaust in informing Israelis' understanding of the world (and he forcefully rejected Holocaust denial). By doing it this way, however, he implied rather clearly that the Holocaust is, if not the justification for the State of Israel, at the very least a central part of its story.
This is not true. Israel wasn't created because of the Holocaust, the Jews aren't here because of the Holocaust, the international community did not "give Palestine" to the Jews because of the Holocaust. I wrote about all this extensively in Right to Exist; I also spent some 25 years of my professional life dealing with the Holocaust and am not trying to belittle its significance. The Jews, however, are in Israel because it's their homeland; because for the past 3,200 years there has not been a single day in which Jews have not lived in the land of Israel; and because in that entire time, but especialy in the past 2,000 years, not a generation has gone by in which Jews didn't write about some aspect of their homeland.
That's a long time, 3,200 years, and it's a very large body of literature, which unfortunately many modern Jews are not well versed in and most of the rest of humanity knows not of its existance; not many groups in the world can point to an uninterrupted engagement with a homeland that has been running strong since before the Illiad was written.
By coincidence, the entire editorial board of this blog participated this morning in a tour of the City of David, the tiny hillock south of Jerusalem's Old City where the original village was situated. Archeologists have recently uncovered part of a palace there from about 1000 BCE, immediately above the layer of Jebusite settlement. Yes: King David's palace. Really! We spent a few hours clambering around, Bible in hand (well, in the guide's hand), reading various stories written 2,500 years ago and more, in the language they were written in which is the language we speak everyday, and tried to decipher which recent archeological finding fits which story. 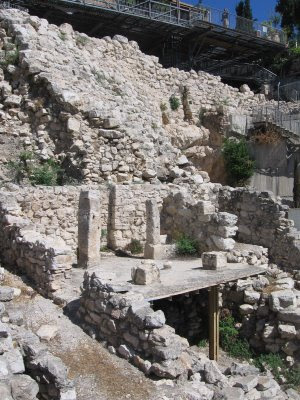 One place, a sealed room on the edge of the scene in this photo, apparently contained the royal archives until it was burned by the Babylonians and the ashes remained in place until they were excavated a few years ago. Among them the excavators found 51 pottery seals that would have been attached to copies of important documents. One bears the name of Gemaryahu son of Shafan, which is pretty impressive if you keep in mind the story of how Jeremaih tried to warn the king of the impending doom of the city, and was not assisted by Gemaryahu, one of the top royal aides. All of which happened precisely at this spot, or a stone's throw from it. (Jeremiah chapter 36). (I have a son named after Gemaryahu's brother Achikam, who played a more admirable role in the story).
Posted by Yaacov at 4:48 PM

that the whole conflict in modern times very much precedes the foundation of the state of Israel can be read in these two articles from 1921 and 1929 which I found 3 days ago for the first time in the archive of The Atlantic.
The authors Albert T. Clay and Owen Tweedy certianly do not like Zionism and the one published 1921 seems to be impressed with the Mufti - If you read them carefully you cannot help being amazed that they were published in a magazine that prides itself on its anti-slavery stance before the Civil War and for reasons unknown but hopefully to its honour refused to publish Mearsheimer & Walt's original essay (which then made it into the LRB)
the links and some others can be found in this Jeffrey Goldberg piece:
http://www.theatlantic.com/doc/200804u/israel-palestine
rgds,
Silke

This is such a wonderful tour in the City of David. I strongly recommend it to anyone visiting Jerusalem.

Is there a virtual version?

I don't seem to find an English version,but here's a Hebrew website
http://www.cityofdavid.org.il/hp.asp

Thanks for stating it so well.

I just got to this link via your recent column on the deciphering of the seal - thanks for posting the picture.