Roadblocks on the West Bank

Heard the one about the more than 600 roadblocks that make life on the West Bank so hellish for the Palestinians? I'm sure you have, often. Why, the United Nations itself says so.

Although if you carefully read the most recent UN report, 18 pages of it, and you understand the topography, recognize the places, and take note of what's really being claimed, the situation is not exactly black and white. I'm not going to do your work for you this morning, but here's one hint, from page 8: 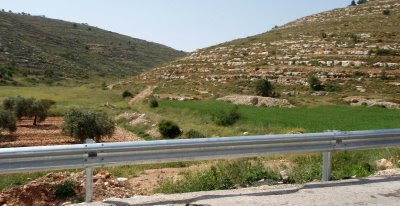 Not certain what you're seeing? The caption may be helpful:

A guardrail and an earthmound blocking a access to Road 60 from a dirt track
south of Sinjil village, Ramallah governorate

They're evil, those Israelis are, putting up guardrails along highways to obstruct tractors and cows from straying onto them from the surrounding countryside. As a matter of fact, their reach is so all-encompassing that every single such guardrail the world over has been set up by Zionists, in case you didn't know; if you see any in your vicinity, say, in New Zealand Texas or Bavaria, now you know they're actually signs of our secret dominance over you. And if this blog goes off air, it'll be because I've been revoked by the Elders.

Meanwhile, back in the real world, the one in which the roadbloacks were put up because the empiric experience was that they were one of the tools to protect civilians from being blown up in Pizza parlors, most of them have been removed, and travel for Palestinians across the West Bank is mostly undisturbed.

On a trip to Ramallah, Palestinians will be checked at the Za'atra roadblock,
which is south of Hawara, but Palestinian eyewitnesses said there are no delays.
This is the only roadblock in the northern West Bank where checks of Palestinian
vehicles are still being carried out. On average, a trip between Ramallah to
Jenin takes 90 minutes, while several months ago it took hours.

Some roadblocks, however, are still acitve:

Twenty days ago the DCO roadblock to the eastern entrance to Qalqiliyah was
removed, and the Einav roadblock east of Tul Karm was also lifted. In it place
there are soldiers but they do not check Palestinian vehicles but only cars with
Israeli license plates to prevent Israeli citizens from entering Palestinian
towns.

Don't expect this to be cited at Mondoweiss. Or the Guardian.

Email ThisBlogThis!Share to TwitterShare to FacebookShare to Pinterest
Labels: Israel at War, Terrorism

I am voting for you to be the Ambassador to the UN.
Asaf

I haven't been involved in this first-hand in a couple years, but the 2006 UN-OCHA listing of checkpoints, etc. listed sections of guardrail in the Hebron district as separate roadblocks, thereby increasing the number exponentially. Is that still the case?

I'm usually in accord with you, Yaacov, but I'm not so sure on this one. There IS a dirt road in the picture, which appears useable by cart or pickup. If Israel did not intend to obstruct that route, would they not have left an opening in the guardrail?

How can you make out a dirt road there? I see the guardrail, but this is a really terrible shot for the purposes of demonstrating a checkpoint.

There is a dirt path there - not really sure if it qualifies as a road. But I don't think that really matters. It's not a residential road - Route 60 is, for all intents and purposes, a highway - of course it will have a guardrail that will not let smaller side roads access it.

Yeah, I see the white gravel bottom right of the picture, but how does this guardrail demonstrate a checkpoint? It's on the side of the gravel?

One of my Pali friends lives close to here, in Jilijiliya, which is just West of Sinjil. I remember talking to her on the phone as she was driving around that area, and she was mentioning how dangerous the roads are, because many of them are built right into the hills and it's easy to swerve off.

There is no checkpoint here. This is a scenic picture of a guardrail overlooking a valley, taken from a road.

Agreed, its not a checkpoint. As I read the UN report, they don't claim that it is, but rather that this is a path/possible road that maybe, for example, some farmers might once have used to get from one side of the road to the other, or join the main road from out in the fields or whatever, & that first a dirt mound was left across the access, which would inconvenience you if you had a cart or something, & now the guardrail has extended the difficulty & made it more permanent. Thus, you have to go find a new, maybe longer route. I have zero knowledge of the terrain, accident stats etc., I'm only saying I don't see this aspect of the report as being self-evidently silly.

As the merchant told Saintsbury about 'Napoleon' brandy- 'We call it so, but I am not prepared to swear to mathematical proportions.'

I don't follow mideast stories much, but every 'I went to Palestine' story I've read has something about roadblocks preventing people from reaching a hospital or something. Are they all telling stretchers?

Thousand of Palis are being treated in Israeli hospitals as we speak. Perhaps tens of thousands, or even hundreds of thousands are treated over the course of the year. Anyone who has money or connections with the PA would much rather go to an Israeli hospital, even for basic, non-emergency care.

Any complication in pregnancy - such as congenital disorders, or in the fields of cardiology, neurology... essentially anything that requires more than basic medical care is often forwarded to Hadassah by default.

There are cases of ambulances who could not pass checkpoints due to a lack of communication, improper paperwork or a blanket checkpoint closure, but of such cases that resulted in death, you can probably count it on two hands in the last decade.

What can I say?

They count what roadblock is however they want.

Permit to build a new road? No. Only Jews need that.

In this posting from 24 June, you say that most WBank roadblocks have been removed, linking to a Haaretz piece that states as much.

But today (20 July) in JPost, there's an article which suggests there are still 100s of roadblocks:

Can you clarify for me? Is the apparent mismatch something to do with different types of roadbloack?

It's a key issue when discussing Israel-Palestine with people whose default position is that Israel is always evil. So any help you can give would be appreciated.

Hi, just a correction. There is no such thing as Palestine. This word is a bastardization of the Roman Philitia, a name used for the region inappropriately, as Philistia is in the region Azza {Gaza}.

Other bastardized words include Nablus, from the Roman Napolis or Neopolis. The real name of this town is Shchem, and has been for at least around 4,000 yrs.

Ever Yishma'eli {Arab} town has been built on top of something Jewish, Roman, or Turkish,...save for Ramle.

Thus, "Israel" is more than sufficient to describe this region.

Of course, Lebanon up to the Litani River also should be in our hands, as that's where the Tribes of Asher and Naftali resided.