I had a meeting up north today, and on the way back it occured to me to drop by Modi'in Illit
and do a spot of reporting. 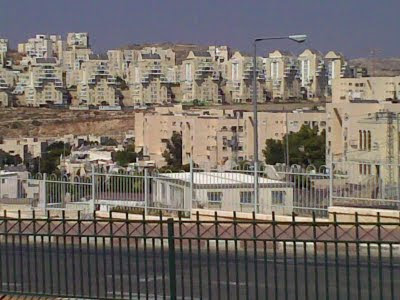 The town was founded in 1990, just over the Green Line, to offer unexpensive housing to large Haredi families from Jerusalem and Bnei Brak. It was originally called Kiryat Sefer. At the end of 2008 it had a population of more than 41,000, making it the largest settlement on the West Bank. The weekly birthrate is 45, or 2,500 babies annually, which makes for a lot of children. A lot of bycicles, too. 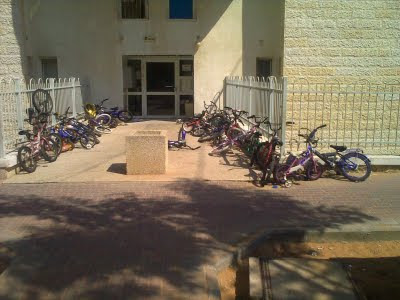 The annual growth rate is 9.5%, which means that in the six months since Obama demanded that Israel stop building on the West Bank, the population of Modi'in Illit as grown by about 2,000 people. This requires additional housing. 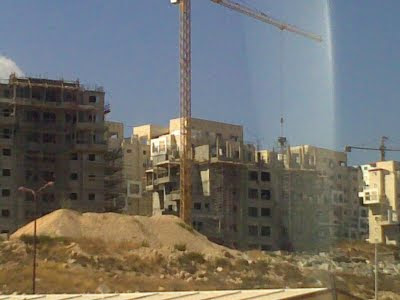 The town is wedged between the Green Line to its west, and the security fence on its east; in the long run the growth will have to be westward since there will be no construction beyond the fence. In essence, Modi'in Illit is a border town. Israel may swap its equivalent for land elsewhere, but I don't see any scenario in which the town will be evacuated. Pretending otherwise will not help peace negotiations,which will by definition be based upon false assumptions.

Annual natural population growth rate is a bit over 6%, assuming no contribution from immigration.

15 years sounds like a long time, but it sure goes by fast. I'm not old enough to have paid attention to Oslo, but Disengagement was 4 years ago already!

As someone so committed to balance, you might point out that the nearby village of Bilin has had 60% of its lands taken by the fence, and that those lands are intended in the future to house the expansion of Mattiyahu East (part of Modiin Ilit's expansion). In your words, "Pretending otherwise will not help peace negotiations, which will by definition be based upon false assumptions."

It's a legitimate point, Alex. Yet there are lots of things I didn't mention. The fact that the land Modi'in Illit is built upon was scrubby brushland, not farmland, contrary to what some claims say. The fact the Israeli Supreme Court accepted some of the claims of the villagers from Bil'in, while rejecting others. The question as to where your statistic comes from, and its veracity.

The reason I didn't go into the whole minefield was that this post, when coupled with the one from Metula earlier this week which told the opposite story, both have in common the understanding that mixing legal issues with political ones is not helpful. Borders between countries are not drawn according to the legal title to plots of land. Partitions, when they happen, are messy, painful, and always leave some people separated from parts of their lives on the other side of the line. Always.

In this case, the line between Israel and the Palestinians, should it ever be drawn and agreed upon, will have Modi'in Illit on the Israeli side. That's a fact. pretending otherwise, as the Obama administration sort of did and may still implicitly be doing, will not promote peace - which is, after all, what they wish to be doing.

Alex brings up the good point that there are legitimate grievances and realities to be considered on both sides. In the case of certain large settlements, it is evident to me that you are correct--it is simply unrealistic to conduct a mass evacuation of these towns. But what about the option proposed recently by Salaam Fayad and Ahmed Qureia? What if these towns were to remain intact and Jewish, but simply fall under the sovereignty of the nascent Palestine? I'm not suggesting that this be applied specifically to Modi'in, but what about other towns?

Smaller towns like Yitzhar that are located east of the separation barrier and even large blocs like Ariel that penetrate deep into the West Bank.

Is it time that we start entertaining the idea of an up and coming Palestinian Jewry?

I'd be all for it. Tho I admit I'm not aware of the proposals you mention. As a general rule, the Palestinians demand that we give them only Judenrein territories.

Were they to be willing to have territory with Jews, however, I don't see why not. I expect something like 99% of the relevant Jews wouldn't stay put and would relocate to Israel, as any sane person would given the choice of living in Israel or Palestine; indeed, as tens of thousands of Palestinians apperently did a few years ago when given the choice between living in suburbs of Ramallah or Bethlehem or staying under direct Israeli rule in Jerusalem. But on the fundamental level, yes, of course. Is there are Jews who feel sucha strong connection to Hebron, say, that they're willing tolive under Palestinian sovereignty, fine. There are a million Palestinians who live in Israel, after all.

This is a good rationale to leave things as they are for a few more years. According to the PLO everything everywhere is "Palestine" accounting for reality, today about a quarter of the land they can get is Jewish. So we're talking about expelling a quarter of the population. A population that in any other circumstances would form the core of any functioning state. But letting those numbers grow and grow, soon they will represent 30-40 even 50% of the population. And even for the PLO it will be hard to say with a straight face that they need to expel more than half the people who live there before they'll even pretend to entertain discussions.

The weekly birthrate is 45, or 2,500 babies annually, which makes for a lot of children. A lot of bycicles, too.The annual growth rate is 9.5%

Thank you for clarifying, Yaacov, that the growth is by no means entirely natural. See; even if you had all births and zero deaths (obviously not the case), the 2,500 new babies per year would yield a natural growth of 6%. I.e., a full 3.5% are newly-arrived migrants, which violates not only the Road Map, but also Sharon's "understandings" with George Bush.

Although I lack the "relevant languages," it's great that you have volunteered to translate those statistical data into as irrelevant a language as English. It's an important contribution to the anti-Zionist cause.

There are actually very few deaths, since the population is mostly young families. Still, I never said there was no immigration. On the contrary. As eveyone knows, Modi'in Illit and Beitar, its slightly smaller look-alike sister to the south, are major pressure valves for the rapidly expanding haredi population of Jerusalem and Bnei Brak. The significance of the agreement with Bush in 2004 was that it recognized that the large settlements near the Green Line would continue to grow by immigration. You don't need to know languages for that: it was stated clearly in English, the official language of the American government.

Ironically, by the way, should Obama manage to force Israel to desist from building in Modi'in Illit and Beitar, as he wishes, thousands of families will have to stay in Jerusalem, thus significantly tilting the demographics of the city from about 70% Jewish up towards the 80% point, further diluting the Palestinian claim to part of the city. Something I assure you Obama's advisers didn't think of.

All irrelevant. Talk of a settlement freeze doesn't really accomplish all that much. What we need is a decision on where the borders will be.

The significance of the agreement with Bush in 2004 was that it recognized that the large settlements near the Green Line would continue to grow by immigration.

As you know, there is a hot dispute among Republicans about what the "understanding" actually involved, but no one has said up to now that it allowed for further immigration.

In fact, Eliott Abram's much-quoted piece in the WSJ is subtitled "The U.S. and Israel reached a clear understanding about natural growth."

So I'd like to know what's the source for your claim that growth by immigration was recognized by the "understanding."

Ibrahim, Ibrahim - why do you keep on trying? Go play football with your son: you'll be spending your life in a far better way.

I don't need articles by Abrams or anyone else. I remember. After all, it wasn't all that long ago. Less than five years, and at my advanced age, five years isn't that far back.

The letter Bush gave to Sharon accepted that the contours of a future border between Israel and Palestine, should the sides ever manage to agree, would have to take into account irrevocable changes on the ground; this was diplomatic terminology for deviating from the Green Line where the demography demanded it. Meaning, some parts of the West Bank would stay in Israel, and Israel would live in those areas as it does elsewhere, by allowing life to go on. I can't say about Argentina, but in many places, including Israel, citizens move house according to their personal needs, and they don't ask the government for permission.

Since I'm so old, I can remember even further back than five years. I can even remember events that happened when Bill Clinton was president. For example, I remember the diktat he made to both sides on December 24th 2000. If this is too far back in history for you, you acn read up about it in lots of books, mostly memoirs of the participants. Now I recognize this will be a wee bit embarrasing for the present Secretary of State, but the position of her husband back in those days, when it mattered, was effectively the same as that of Bush. (Gasp!)

I think we've circled this bush enough now, Fake-Ibrahim. If you wish to continue commenting about it, you know I won't censor you, but I'm not going to respond anymore.