In response to my previous post, Gavin wonders if perhaps Israel should have made a big show of having the PA arrest the killers, rather than go in and kill them, which doesn't look good to him. My inclination is always to listen respectfully to Gavin, since his perspective is so different than mine.

On an emotional level, I recognize the simple satisfaction these deaths give me: three terrorists who will never be set free in some future exchange of 1,456 Palestinians for two kidnapped Israelis who have been kept totally incommunicado for years by their Palestinian captors. Yet I also know that gratifying as such sentiments may be, they're not particularly laudable. Killing your enemy in battle is what battle is about; arresting criminals and bringing them to justice is what police-work is about - and this case falls somewhere in between.

The IDF seems to recognize this. Throughout the 2nd Intifada, targeted assassinations of Palestinian terrorists became ever more rare in the West Bank, as the Israelis reasserted their direct control after relinquishing it in the 1990s, and they were increasingly able to arrest their targets. Meanwhile, in Gaza the option of arrest basically didn't exist and targeted killings were the norm.

The option of having the Palestinians arrest and try these men doesn't exist. True, as Gavin points out, the PA has capital punishment - but not for attacking Israelis. Capital punishment in the PA is mostly for suspected collaboration with Israel. The possibility that Palestinian killers of an Israeli settler would be brought to justice and serve their sentence in the PA is non-existent.

This leaves the option of the IDF arresting the killers, a capacity that clearly exists since Israel arrests terror suspects at will throughout the West Bank. That's who those 1,000 prisoners being demanded by Hamas in exchange for Gilad Shalit are: Palestinian activists and killers who have been arrested and tried by Israel. The knee-jerk reaction of B'Tselem yesterday is to be understood in this context: They're saying these three men ought to have been arrested, not killed.

What it boils down to are two issues:
1. Would it have been possible for the ID to arrest, not kill these men?
2. If it were possible, was there a decision, or even only a trigger-happiness, that encouraged the IDF to kill them quickly?

I wasn't there, nor was B'Tselem nor any other media outlet - nor was Salam Fayad, the Palestinian prime minister. So none of us have the full facts. Ultimately, it was probably a spilt-second decision of the commanders on the spot. Still, it's worth keeping in mind that the arrests were being made in the Casbah of Nablus, a warren of alleys, jumbled homes, passages, and an occasional tunnel (one of the men was killed inside one of them); even back in the 1980s, when there was no PA and Israel controlled the town itself, the Casbah wasn't the kind of place policemen or soldiers simply strolled through. 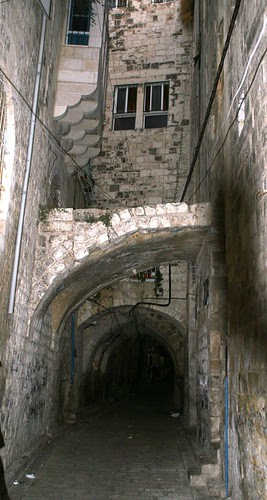 what a terrifying location to have to operate in

- it made us aware and we talked kind of horrified of all the places where one could comfortably hide there and outsmart soldiers especially if they were forced to fight "fair" and not allowed to flatten the whole thing
remembering that makes me shudder looking at these photos
rgds,
Silke

Thanks for the explanation Yaacov. Where I was exploring was the possible opportunities for Israel to turn this into a win/win scenario... to gain in more ways than one.

I'd ask people this. Might it not be possible for Israel to shape the political battlefield. To take advantage of situations like this; force the PA into a corner where they have no options but to A/ comply with the law and arrest, prosecute & jail/hang the killers or B/ reveal publicly on the international stage their perfidy & treachery.

Situations like this are fertile ground for politics because you already know what the PA will do. It's predictable, so you can prepare the trap and let them walk right into it.

You guys in the firing line know what the PA etc are really like, but the rest of us very rarely see the physical proof of it. It's no good Israel telling the world what the PA is like, they won't believe you. The world needs to see it for themselves. To my mind Israel lets them off the hook all the time by not backing them into a corner politically. When there's a chance to expose their treachery then I reckon it's not a bad idea to take it (?)

@Gavin
judging from my experience with office feuds once a party has been labelled the stronger one no amount of exposing the perfidities of the slanderers is going to remedy anything.

therefore in my perception the only way out would be to present Israel as the David in the scenario and that would mean to write up its vulnerabilities which would have its own draw-backs. That's why I perceive it as a terrible Catch 22.

i.e. in my experience the public mood always always always goes with the party who manages to present itself as the weak one. Probably makes onlookers feel oh so virtuous and commiserating seems to be a deeply satisfying occupation (who doesnÄt like a good cry in a movie) they seem to prefer that even if it should be in their vital and very rational interest to side with the strong party. They'll switch sides only when they are threatened themselves and the formerly maligned strong party seems to be promising that it could provide protection.

Common sense tells me you're right Silke, but the salesman in me keeps telling me that even from adversity one can turn opportunities into advantages. But then I wasn't much of a salesman anyway.

Don't read too much into my raves folks. When I read about situations like this I get depressed at the inevitability of what will follow & sometimes I'm just thinking aloud here. I think it's bad that all three were killed because it looks bad for Israel. I don't personally care about them, they were callous cold blooded murderers & deserve no sympathy. But if only one, or two, had been killed then the inevitable media smears on Israel would be a little less harsh. We can all easily predict how the headlines will read, and it is a bit depressing that Israel will come out looking like the bad guy once again.

I'd really like to see Israel start winning the propaganda war, and I'm ever the optimist so I don't give up hope that they can't do it. They're not winning now so the most obvious conclusion is that the tactics need to be changed.

Gavin
in general I am very much for trying the impossible again and again but not in a situation where, judging from the pictures Dr. Lozowick posted and our village fantasizing about urban guerilla warfare, it will be a question of life or death or injury for IDF-lers

- letting the Palestinian forces in there to just arrest in the hope of exposing their bias would most likely have led to all kinds of unmanageable flare ups with dire consequences for the IDF who would have had to clear it up afterwards anyway.

To change world perception of Israel as the evil giant a movie at least on the scale of "Uncle Tom's cabin" is required, i.e. IMO anything rational is not going to change anything

- remember there were those hauting videos of kindergarden-kids running for shelter in Sderot. That was a rational way of trying to create empathy for a very real plight.
Did it help?
Even though I found it was good for creating favourable reactions in talking to neighbours but the media didn't care a hoot, they kept going on their time-honoured safe path - when Israel went against Gaza I at least didn't see any reminders of the plight of toddlers in Sderot.

Believe it or not, I agree with you. I just think you vastly overestimate the political abilities of Israeli politicians. Remember, the Israeli "elite" is operating very far away from all this, in a completely different world of politics and diplomatic relations. They probably had nothing to do with planning, authorizing or directing this operation at all. All that was done by 21-25 year olds whose main priority was getting home to their girlfriends and wives that night. It was approved by the division commander, someone in his late thirties or early forties, with no political experience.

At most, the Defense minister received an update with his evening tea that IDF is going in Area A, and then moved on to more important tasks, like making sure Bibi doesn't sideline Labor's portfolio by breaking Kadima in half and reassigning all the cabinet positions.

Who knows what really happened. Maybe the PA gave the IDF the coordinates for these three and begged the IDF to kill them to set an example. This way the PA would not look like total Israeli pawns, and Fayaad can go denounce the operation while in the back everyone giggles. That's probably how Palestinians on the ground see it anyway.

All this is fine. The bottom line is, despite removing all those checkpoints, despite vast improvements in the Palestinian economy, despite training a Palestinian army, despite the settlement freeze... it did not slow down for an instant the desire of three Palestinian men with a gun to kill a Jew, any Jew. And if there were five Jews, they would have killed five. In fact, I would argue that all these factors precipitated this attack. Go and prove me wrong.

I'm dialing it back about 80% for the holidays, and Yaacov has busted in to, like, 10th gear this Sunday. I'm a shamed blogger.

Along with his link in the comments to the previous post, Silke didn't point out who the reviewer is for that NY Times Book Review of Footnotes in Gaza: Patrick Cockburn, multi-award winning journalist, indeed, but with a long track record on this subject, and regular contributor to his brother Alexander's very anti-Israeli CounterPunch, which has publishe Robert Fisk, Edward Said, Tariq Ali, Ward Churchill, Noam Chomsky, and Norman Finkelstein, among others.

The review promotes the notion that Palestinian "anger" has roots that only go back as far as 1956 and those massacres that apparently, for Cockburn, have no counterparts to go with the counter punch.

The Times gets the review it pays for in the reviewer it selects. Why not offer the assignment to Marwan Barghouti. I'm sure he can always use the money.

Israel could certainly use better PR, as Gavin suggests, and I'm all for the effort, but as Yaacov is regularly demonstrating, along with others like Richard Landes at the Augean Stables, the psychological and ideological roots of the current situation are profoundly deep, and go beyond Israel, and will be long time in changing.

If Israel had the death penalty, human life would have more value. Ironically enough, the liquidation of the terrorists is reason enough for Israel to adopt the death penalty. Murder is too severe a crime to be rewarded with Club Med style accommodations in Israeli prisons and life in prison in Israel as every intelligent Israeli knows is a joke. Those who murder Jews receive no real punishment for their crimes.