Between 1949 and 1967, while Jerusalem was divided between Israel and Jordan, there was an Israeli enclave about a mile to the east of the border, in the Jordanian part of town. This was Mount Scopus, with the campus of the Hebrew university and Haddassh hospital. There was an agreement whereby every two weeks 200 Israelis would cross Jordanian territory to the enclave, and sit there until the next group replaced them two weeks later.

Throughout the whole period everyone knew that sooner or later the war would resume, and that when that happened Israel would try to reconnect the mountain with the city. To prevent this the Jordanians built a series of fortifications in that mile, and its centerpiece was Amunition Hill, an apt name borrowed from the days after the British conquered the city in 1917 and General Allenby stored his army's ammunition there. 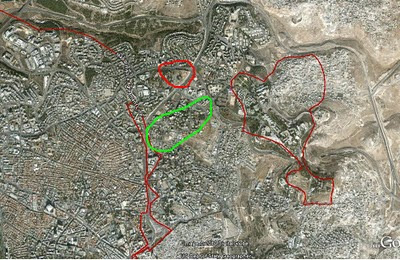 The picture shows the 1949 lines, to which I've marked Ammunition Hill in red, and just for the context, Shaikh Jarrah in green. From the one to the other would be a four minute walk if it weren't for the highway of route 1 which takes some time to cross.

On the night between June 5th and 6th 1967 the paratroopers, backed by a few tanks, made their attack, directly on the Jordanian fortifications. The section of the battle on Ammunition Hill raged from about 2am to 5:30, early next morning. It was face to face combat, between the best forces each side had. 71 Jordanians were killed, and 35 Israelis: most of the defenders died, as did a quarter of the attackers.

A story I heard not long afterward told that in the early morning the IDF troops gathered the fallen Jordanians into a pit and covered it, with a makeshift sign that read "Here lie 71 brave Jordanian soldiers".

A few hours later the paratroopers were at the Kotel.

In 1968 the military band of Central Command (Pikud Merkaz) recorded a song about the battle. It's not the best music we've got, and the lyrics are more dramatic than profound, but it has stuck in the communal memory and everyone can sing its refrain and snatches of the story. The final narrative line: "I don't know why I was given a medal, all I wanted to do was to get home in one piece" has acquired mythical stature, though often overlaid with irony and irreverence.

Hebrew lyrics
English translation
"It was then the morning of the second day of the war in Jerusalem. The horizon paled in the east. We were at the climax of the battle on Ammunition Hill. We'd been fighting there for three hours. A fierce battle was under way. Fatal. The Jordanians fought stubbornly. It was a position fortified in an exceptional manner. At a certain point in the fight there remained next to me only four soldiers. We went up there with a force of two platoons. I didn't know where the others were because the connection with Dudik, the platoon commander, was cut off still at the beginning of the battle. At that moment I thought that everyone had been killed."

At two, two-thirty
We entered through the stony terrain
To the field of fire and mines
Of Ammunition Hill

"At that same moment a grenade was thrown from outside. Miraculously we weren't hit. I was afraid the Jordanians would throw more grenades. Someone had to run from above and cover. I didn't have time to ask who would volunteer. I sent Eitan. Eitan didn't hesitate for a moment. He climbed up and began to fire his machine gun. Sometimes he would overtake me and I'd have to yell to him to remain in line with me. That's how we crossed some 30 meters. Eitan would cover from above and we would clear the bunkers from within, until he was hit in the head and fell inside."

"We decided to try blowing up their bunker with a bazooka. The bazooka made a few scratches in the concrete. We decided to try with explosive material. I waited above them until the guy came back with the explosives. He would throw me package after package, and I would lay them one by one at the entrance of their bunker. They had a system of their own: first they threw a grenade, afterwards they fired a volley, and then they rested. Between volley and grenade, I would approach the entrance of their bunker and place the explosives. I triggered the explosives and moved away as far as I could. I had four meters in which to move because also behind me were [Arab] Legionnaires. I don't know why I received a commendation, I simply wanted to get home safely."

At seven, seven-twenty
To the police school
Were gathered all those who remained
From Ammunition Hill

Smoke arose from the hill
The sun in the east rose higher
We returned to the city, seven
From Ammunition Hill

We returned to the city, seven
Smoke arose from the hill
The sun in the east rose higher
On Ammunition Hill

On fortified bunkers
And on our brothers, men
Who remained there aged 20
On Ammunition Hill

The You Tube video I've embedded was taken on the hill, which stands still as it did that morning, a memorial to the soldiers who died taking Jerusalem.

The engagement marked one of those times Jews fought in the defense of Jerusalem. What happened on Ammunition Hill must never be forgotten.

Want to test your knowledge of Jerusalem? Take the quiz:

The stones were added later to preserve the trenches, right? The Jordanians didn't take the time to reinforce their trenches like that, I would think. Does anyone know?

I was first there in the summer of 1967, a few months after the battle. The trenches were deep, and covered with spent ammo. The clean concrete-and-stone walls may have been renewed, but the originals were quite professional.