Don't Divide Jerusalem: A Border Through the Old City

The putative dividers of Jerusalem - the sincere ones, at any rate - don't really have much idea about what the place looks like. That's the only explanation I can think of for their breathtaking disregard of what the division will mean in reality. This is true for many parts of town, but nowhere more than in the Old City.

When historians tell that there has been a Jewish majority in Jerusalem since the mid 19th century at the latest, they mean the Old City: that was all there was in those days. From the 1870s the Jews seemed to have left the Old city in larger numbers than the Arabs, building new and less cramped neighborhoods outside the walls, so that eventually there probably was an Arab majority inside the walls. After the Arab riots of 1929 the British ethnically cleansed the Jews from most of the old city, leaving them only in the historical Jewish quarter so as to reduce tensions. 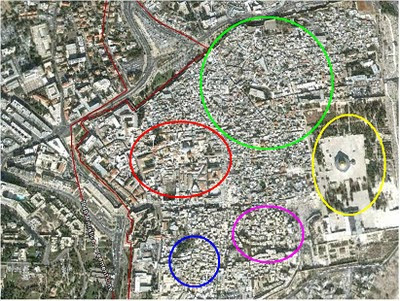 Green: Muslim Quarter, with no Jews after 1929. Red: Christian Quarter. There seem to have been few Jews there if at all. Blue: Armenian Quarter, with Jews populating its eastern area, adjacent to the Jewish Quarter, in violet.

The Clinton parameters of December 24th 2000 foresaw the re-enacting the British move: moving Jews out of the Muslim Quarter, where they're a minority, and drawing a border around the Jewish Quarter. The Geneva Accord website offers an aerial photo with the division superimposed: 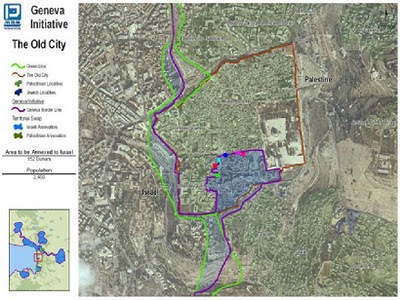 I've added six colored spots to their map, each signifying a short video I've made recently, i.e. April and May 2010. I hope each of them explains itself.

I've described the nine logical scenarios of dividing Jerusalem, here. In most of them the border will have to be real, not a notional line on a map. As these videos show, in the old city there are many places where such a border will run down narrow allies, through buildings, and in some cases (e.g. on Chain Gate street) it will require ground floors to be in Palestine, and upper floors of the same buildings in Israel.

This would be idiotic if it wasn't tragic.

Bikkur Cholim st, on the edge of the Armenian-Jewish quarter, red dot on the map:

This one is from a point where the Armenian and Jewish quarters are all jumbled together (green dot on the map):


Another film from the Western edge of the Jewish Quarter, on Chabad street as it descends to the Arab Market (light blue dot on the map):


This one is on the roof of a point where the Muslim and Jewish Quarters touch. (Dark blue dot on the map):


Finally, here are two films from Chain Gate street in the Muslim Quarter, where the upper stories, including a rooftop version of the same street, are slated to be in Israel, while the ground floors are to be in Palestine. (Dark and pale violet dots on the map):


the next installment in this series is here.
Posted by Yaacov at 5:48 PM

leaving everything else aside even thinking about dividing i.e. destroying a beauty like that is barbaric

There is something odd about the way your videos are embedded. Sometimes they will run when clicked upon, sometimes not. Perhaps you should include hyperlinks to the videos on Youtube in the text.

Ah, but the goal is not to preserve beauty, or legacy, or tradition.

The goal is to destroy.

And the rationale is justice, fairness and morality.

What Jon said. Which is why I'm very curious what Alex and Didi think about this. Because both are fairly intelligent, but I imagine both think anyone against the division of Jerusalem is severely misguided. Either of you out there? Care to share your thoughts?

I didn't know about the ethnic cleansing. Is there a good account in English of the events of 1929?

I couldn't wait with somebody coming up with an answer to Joe's question and found this at Google
It isn't very specific about Jerusalem but I was struck by how contemporary it feels - a real plus ca change ...
Silke

Thank you for taking the time to make these Yaacov. I have only watched one so far, as I want to give it my full attention.

If I may ask some geeky, civil engineering, quality-of-life type questions here:

Are the electricity, sewage and water supply for these places all integrated? Do the division plans address how these services continue? What about street cleaning and garbage collection? Is that street supposed to have joint access for residents of both countries? Who polices it under the plan?

That's just a few quick thoughts. Do you know how well people get along with each other now?

Nycerbarb
I am green with jealousy

it should have been me who came up with that how to handle the utilities question - it isn't only a geeky civil engineering question it also makes the clerk inside me quiver with excitement and delight at the impossibility of it all
- let's assume the stuff is mutually used coming up with the contracts is going to create jobs for decades and then what if there is a leak who is going to pay for the leaked stuff and if it was an "intentional" leak who is going to do the investigating and so on and so on ...
Silke

I used to live at the light blue dot, in the last courtyard in Chabad St., that was behind you in the 4th video. You walked under my bedroom window at about the 0:32 mark in the 2nd video.

Just finished watching the remaining videos. Do you know anything about the history of the buildings you feature in the last 2 videos? How did they come to be Arab below and Jewish above? Is the Jewish residence post-'67 construction? So curious.

Even though you are a neofascist, I agree that the Old City should not be divided. It should be given to its true owners, the Palestinians. The Jews should be moved out of the so called Jewish quarter to someplace like Flatbush. The world will not tolerate a Jewish disneyland at the cost of world peace

Yaacov may be a neofascist, but at least he exists :-)

Oh fun, fun, fun! Look who is here! It is little racist Tony!

"We Jews are too sophisticated to invest a particular physical locale with sanctity."

Yes, those primitive Moslems, so, so primitive that they have to invest places sanctity. No sophisitication, there. That's why we must indulge their primitive needs.

Actually, I've decided that Tony is probably Orthodox and Right-wing. Who else would write about Flatbush and world peace.

Yeah, he's definitely parodying Rabbis for Human Rights or some such organization.