People who look forward to the division of Jerusalem between Israel and Palestine assume and hope the division will lead to peaceful coexistence and good will to replace a century of hatred bloodshed war and suffering. A noble hope. Yet they must also take into account the possibility it won't. Dividing Jerusalem will inevitably be a gamble.

In this installation of the series of thinking about what dividing Jerusalem will really look like, on the ground, I'm returning to Mamila.

Mamila is the neighborhood directly outside the Jaffa Gate. It was founded in the late 19th century. In 1920, when the local Arabs launched their first-ever large-scale attack on their Jewish neighbors, looting raping and murdering six Jews, Mamila was one of the places they assaulted. Between 1948 and 1967 the eastern edge of the neighborhood was in no-man's-land between Jordan and Israel; Mamila street was blocked by a high concrete wall to allow the locals to walk on it without being shot by Jordanian snipers of the wall of the Old City. (There were many cases of sniping in those bad days). 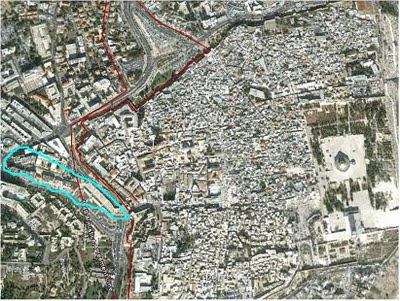 Here's a picture of the wall, unfortunately scanned with a low resolution so you can't see the details, but the photographer (David Krojanker) was on the Israeli side looking across the line to the Old City. 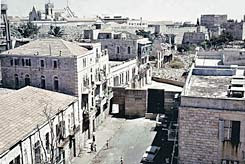 In the 1980s a project began to rebuild the neighborhood. The southern part of it is now the Mezudat David hotel and the David's Village luxury apartment project. North of Mamila Road (the part I outlined on the aerial photo above) is the Mamila shopping center, one of the more popular and tasteful shopping areas in town. It sits a literal stone's throw from the Old City; should the division of Jerusalem ever go wrong for whatever reason, there will be no need for Kassams. A simple handgun will be enough to chase all civilians out of Mamila. Here are some films I recently made there.

The previous installment of this series of posts was here, the next one is here, and here is a collection of the entire series prior to it.
Posted by Yaacov at 11:00 AM

Jerusalem Mayor Nir Barkat spoke about the Master Plan for future construction in the city and discussed the municipality's response to illegal building in Jeruaslem at the Jerusalem Center for Public Affairs,last week on May 20, 2010.

and if you would like to test your knowledge about jerusalem please go to the center's "Jerusalem Quiz" at: http://www.jcpa.org/quiz/jerusalemquiz.html

Isn’t the hope that the division of the West Bank between Israel and Palestine will lead to peaceful coexistence and good will also a noble hope, at least for now? Perhaps a simple handgun fired from the border in the West Bank would not cause the same bloodshed as it would in a divided Jerusalem. But a Kassam fired from the border certainly would.

Saul
I wouldn't call those hopes noble - people who are advocating for "let's get this out of the way" seem to not being able to acknowledge that there are intractables in real life.