Things You Can Learn from Old Graves

A few months ago Didi Remez challenged me to state my position on Jerusalem's history. In case you've missed it (many people have, thankfully), there's an academic insurgency underway these past 15 or 20 years, spearheaded - predictably - by a coalition of anti-Zionist European archeologists, and some Israeli ones. In a nutshell, the claim is that the bible wasn't (this was the title of a long article about them in Haaretz about a decade ago). King David wasn't, the House of David wasn't, the Temple wasn't, Jerusalem wasn't - not until much later - and so on.

I wrote a bit about this in Right to Exist: A Moral Defense of Israel's Wars

, but in a general way, not focusing in particular on Jerusalem. Didi helpfully sent me an article of the sort he regards as acceptable, to help me along; so far, however, I haven't said much on the matter because doing so would require serious investigation and I've not found the time. I do intend to get there, however.

Today I joined a tour of ancient burial places in Jerusalem, given by Dr. Eyal Meron, an archeologist himself. While I've been living in this town for more than 40 years, and consider myself as knowledgeable about it as the next fellow, there are vast swathes of things I don't know. Most of what Eyal showed us today was new to me - in spite of most of it being very ancient.

We started in the Dominican monastery of St. Etienne, also known as the Ecole Biblique, a French compound transplanted into the middle of Jerusalem like a combination of time- and place travel. 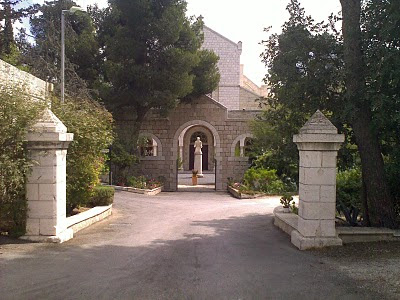 The monastery itself is off to the left 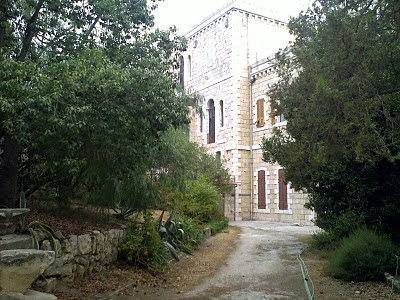 However, we were here to see something else. If you cross the courtyard to the far right corner, behind the statue of St. Stephen, there's a door most people don't notice 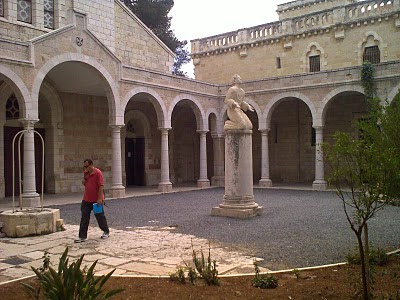 behind which lies a peaceful grove of trees 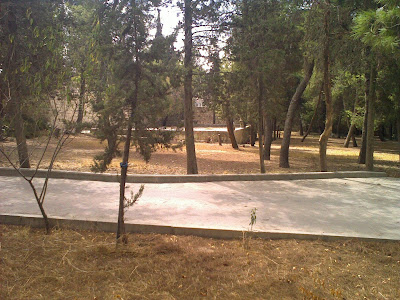 and in the grove there's an underground structure. The roof above its entrance is modern 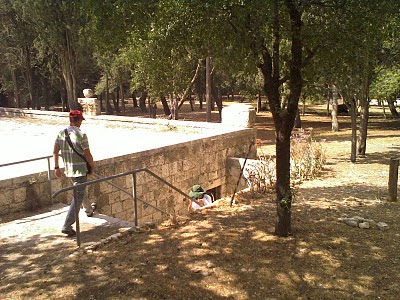 and some of the local Dominican brothers of the 20th century are buried in it. But then, deeper inside, there's a set of rooms, chiseled into the rock, and quite very dark (sorry, no photos). There's a front room of a precise size (7X8X5 ama, if I remember correctly), a shallow hole in its floor with bird bones - remains of sacrificial offerings - which were still there when the first Dominicans investigated the cave in the 19th century, and ornately decorated walls. There are a series of side rooms, each of them with two or three rock shelves on which cadavers were laid out, and beneath them hollow cavities where the bones were collected.

The bones are still there, jumbled together, remains of at least 20 different individuals, all of whom lived in this city in the 8th century BCE, about 2,800 years ago.

Such an elaborate and expensive arrangement for the dead, explained Eyal, signifies a city in which some of the living are very wealthy. Who were they? There's no way to know. Not the royalty, since their graves have been identified elsewhere. "Open the Bible to the book of Kings, read the chapters about the mid-1st-Temple days, and choose any of the rich powerful or important families: this is the burial place of one of them".

That was merely the first station on our tour, though it's the last I'll report on today. Still, Jerusalem being the fiendishly complicated place that it is, I can't resist adding that when you walk out the gate of the walled, serene and reflective monastery, with its impressive church, important library, shady groves and long dead Jewish aristocrats, and you're on a busy but grubby street behind the bus depot of East Jerusalem with all its clamor and squalor, right across the street there's a shop selling cold drinks and junk-food. The name of the shop? 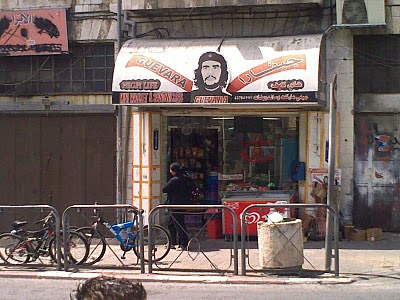 That's right. The Argentine butcher from Cuba, selling his candy bars and glaring at the Church. In Arabic.

Update: Elder of Ziyon has posted a film from Jerusalem in 1918. Definitely worth watching.
Posted by Yaacov at 9:12 PM

I don't know whether this guy is one of the "new" ones, however I remember that he told the story in a way that left me with no doubt whatsoever that David was for real and that there was a town and I remember I liked the man (it is from 2008).
The link to the audio is on the top right corner, below that is a link to the manuscript

I live in Argentina and last week I attended to a 1hr seminar from an israeli archeologist, Ianir Milevsky.

What I found somewhat striking was that the region that his conference would talk about, was "Palestine". That's what said in the title presentation. Strangely enough as the timespan it covered ranged from the old biblical times where that name didnt even exist. It didnt seem strange to a friend of mine with no connection at all with judaism or Israel.

I'm not very affiliated with the discipline but having read about "Bible unearthed" I happened to be somewhat informed about the existence of a "minimalist vs. maximalist" debate.
Luckily Milevsky expressed that there isn't a firm consensus over these minimalist positions and mentioned some archeologists that dispute it, such as Oded Lifschitz.

Even though he didn't even addressed further the debate, his comment was a good thing to do as in spanish the information on the topic is preety scarce. As it often happens with many antizionist history books (Finkelstein, Pappé, et al), "Bible Unearthed" is one of the few biblical archaeology books from the last 20-30 yrs. translated in spanish.

Thanks for this post Yaacov. You definitely have someone interested if you happen to write more about the subject.

I would do some DNA testing on the bones, before Atara Kadisha get to them. That would be very interesting academically and whatever the results, it would put the cat among the pigeons. I can just hear bleating about freedom of academic research from all sides.

eze reminded me how much I liked Werner Keller's books decades ago
they are still in print but are said not to be state of the art and it looks like they have too much of a Christian slant for my present tastes.

therefore I'd greatly appreciate it, if Yaacov would pass on some reading recommendations or make some of his own. Bible Unearthed turns me off a bit because by now I've become allergic to the word "new".

Also I am not averse to historical novels, if the author is careful with his history.

Ah, the joys, the joys of revisionism....

On a recent trip a friend of ours, very knowledgeable about Jerusalem, took us to see the graves of the Kohanim that were excavated behind the Menachem Begin Heritage Center - where you can see graves that were scooped out of the rock, the priests were laid there until their bones only remained, and a small cave in which "their bones were gathered to their forefathers" - basically, tossed in there. A little boy climbed into the gave and found a silver scroll bearing the Birkat HaKohanim - the oldest copy known.

Its s good place to have lunch, overlooking the old city.

I was quite struck by that Guevara awning when visiting the city just this year, and took an identical photo (as I suppose many a visitor has). Alas, I was so distracted by Che that I completely missed the French compound. Thanks for a fascinating post.

Coincidentally, there is an interesting article today in Le Figaro about precisely those holy sites owned by the French government in Jerusalem. It seems that France is the only foreign power with titles to Jerusalem properties (what ever happened with Migrash haRussim?)
The article is in French, but there are pictures and a map.

Sylvia
I put something on the Negotiations thread to which you might know something
doesn't the Vatican STATE own property in Jerusalem?
Silke