Desert Monastaries in the Suburbs

In the 1930's an American agronomist and proto-environmentalist bythe name of Walter Lowdermilk visited Mandatory Palestine as part of a world-wide survey he was doing for the American Department of Agriculture. He was deeply impressed by the efforts of the Zionist pioneers to roll back the desert and rejuvenate agricultural practices. In a subsequent book he postulated that were the land to be treated correctly it might possibly be able to support 8-10 million inhabitants someday.

There are about 12 million today, and growing.


Many years earlier - almost 1,600, to be precise - a movement had begun in which Christian monks and hermits began to settle in the desert to the east of Jerusalem. They were following in the footsteps of earlier monks in Egypt and elsewhere; the ones in the Judean desert wished to live far from the cities and bustle of civilization, but also close enough as to be able to interact with pilgrims and other potential benefactors. At the peak of the phenomenon there were more than a hundred monasteries of varying sizes in the Judean desert. Most of them were destroyed by the Persians in 614, and then were not rebuilt because of the Muslim invasion of 634. Some of them were rebuilt during the Crusader kingdoms of the 12-13th centuries, but then fell into disuse. Today there are six such monasteries, most of them with a single monk or a handful of them at most.

Of course, having 12 million people in a land that used to host a million or two at the best of times, along with the technology to pipe water out into the desert, means the settled areas are a bit larger than they once were.

How much larger? Well, take the large and famous monastery of Euthymius the Great (died in 473). 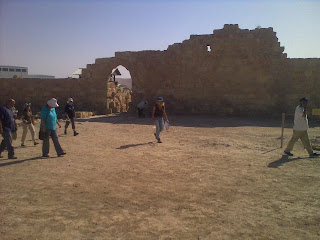 Today the remnants of the monastery lie inside the industry park of Maaleh Adumim, at the eastern edge of Greater Jerusalem. 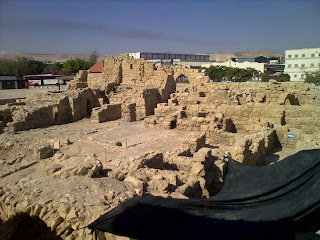 When Euthymus looked around he saw only desert - which still works if you look north south or east. But not West: 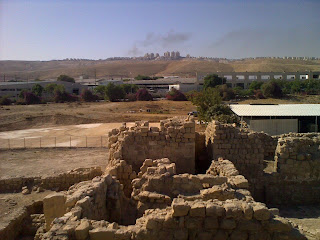 On the hilltop a mile away is Maaleh Adumim. You can rail against it if you wish, but it's there. Martyrius (died 486) would have been even more surprised by the changes to his surroundings: 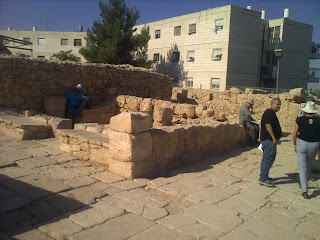 Although the records tell that the monastery of Martyrius was one of the larger ones around, no-one born after 620 or thereabouts knew where it was, until in 1979 Israel began building Maaleh Adumim, and the bulldozers came across it. So there it is, in the middle of town. 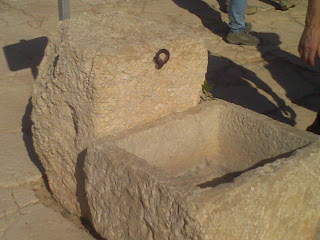 The metal ring above the trough is from the 6th century. Since even back then the Judean desert was an oft-disputed territory, and the monks knew that not all the neighbors liked them,  they built their monastery with only one entrance and even that could be blocked by a large round rock that was rolled across the entrance. 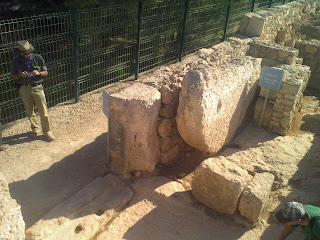 When shove came to push, however, this didn't help. In 614 the Persians broke in, killed the monks, forgot they'd ever been there, and no-one found them for the next 1,365 years or so.

Can one imagine what these monasteries looked like in real life, before they were destroyed? Well, yes. Because to the east of Jericho there's one that's still there (or perhaps, is there again): the monastery of Gerasimus (died 475): 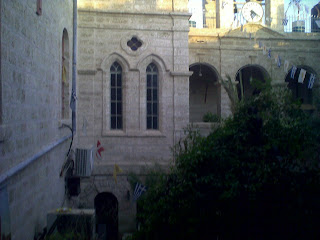 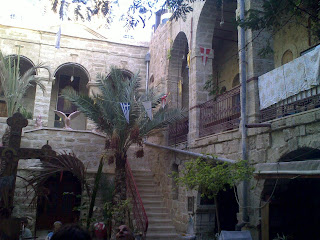 Outside, in the parking lot, you can see, side by side, cars with Palestinian Authority license plates and Israeli ones. Not peace, perhaps, but peaceful. 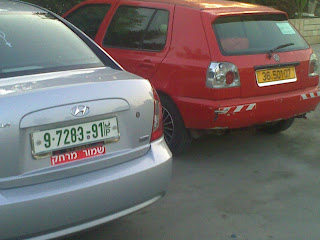 Should you be interested in learning more about this ancient chapter of history, it will come as no surprise that the single best book was written rather a while ago: The Desert a City: An Introduction to the Study of Egyptian and Palestian Monasticism Under the Christian Empire

Juniper in the Desert said...

Lovely and interesting article, thanks!

There are several ruined monasteries walking distance from my home in Modiin.

You forgot the "Grand-Daddy" of all ancient monasteries in suburban settings, ie. the Monastery of the Cross in the Valley of the Cross, right below the Israel Museum in Jerusalem. Yes, today it's in an urban setting, but that is only because of the westward expansion and development of the city in the '60s and '70s. Up until the '60s it was at the foot of the Rehavia neighborhood with little between it and Beit HaKerem. Then came Hebrew U @ Givat Ram and the Museum. It is still an oasis of wilderness in the middle of the city.

I admit, I had forgotten the Monastery of the Cross, even tho I walk by it a few times a week. Moreover, it's been there since the 5th century, too, tho I don't know about all the intervening centuries. Also, it's not in the desert.

Does that say keep back?

How is it vocalized?