A while ago Jonathan sent me a link to this article in the Guardian, by a fellow who says he knows all about real estate in Israel and Palestine. Having read it I'm unconvinced of his expertize, but everyone's entitled to spout nonsense. What Jonathan wanted to know was about this section:


Thirteen years ago, the first Netanyahu administration built the settlement of Har Homa on land inside the Palestinian city of Bethlehem. Har Homa has struggled to find residents and is still largely empty. The head of the residents committee recently claimed it had filled 4,000 properties, but a tour of the development tells another story, with building after building unglazed and cold.

So, first, the part about Bethlehem. Har Homa, and Um Tuba, and Tsur Baher, are all situated in what the Jordanians defined as the Bethlehem county. Not the city, the county. Since the Jordanian control of the West Bank was illegal according to international law, and lasted only 19 years ending in 1967, one might wonder why it's important to mention and if the author's description is helpful. More significant, however, was the part about the empty buildings. I admit I'd never heard that there are lots of empty apartments in Har Homa, rather the opposite, but it never hurts to check. So one evening last week I drove down to Har Home, about a 20-minute drive from where I live. It was early evening, when families with children tend to have lots of lights on, and cars are parked out in front. Lo and behold: most buildings had lights in the windows and cars parked out front. The only place that fit the Guardian's description was at the edge of the neighborhood, where some of the buildings are clearly just a bit short of being populated, in that chaotic stage where the construction workers are still there but the first movers can be seen coming.

I came away with the surprising result that once again, the Guardian isn't the most trustworthy purveyor of facts about Israel.

Yesterday the Guardian joined up with Al Jazeera to launch what they're calling "The Palestine Papers". I admit I don't know if these papers are or are not authentic. However, they tell that the Palestinian negotiators apparently acquiesced to the Clinton Parameters of December 2000, whereby Jerusalem would be divided along ethnic lines: Jewish neighborhoods in Israel, Arab ones in Palestine. Except when they didn't: they were not willing to except Israeli control of Maale Adumim (population of about 40,000), nor of Har Homa. Perhaps because Har Homa is the most recent of Jewish neighborhoods, with construction beginning in the 1990s (and still going on today). There are somewhere betwen 15-20,000 people in Har Homa, but they must leave, say the Palestinians. True, the hill lies less than a mile from the Green Line of 1967, and there are no Palestinian neighborhoods that will be "trapped" between it and Jewish Jerusalem, but it must be dismantled.

So I went down there again today, to look around in daylight. Here's what some of it it looks like from the main road, traveling east. 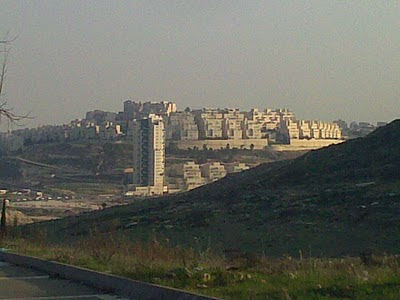 This is what it looks like from Um Tuba, directly to the north, and then what Um Tuba and Tsur Baher look like from Har Homa: 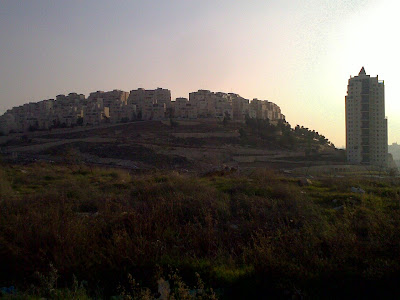 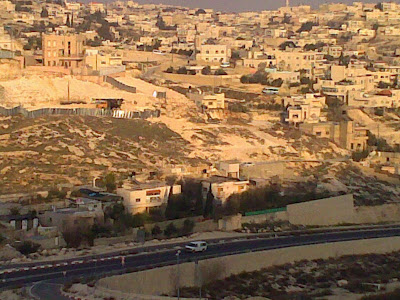 Once you're inside the neighborhood, it looks like a standard large-scale development project. Lots of uniform buildings marching up the roads. 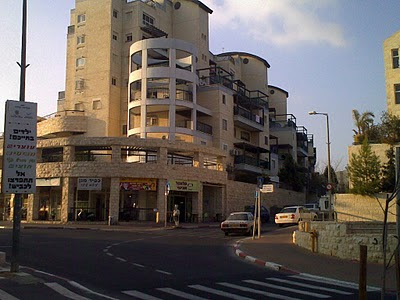 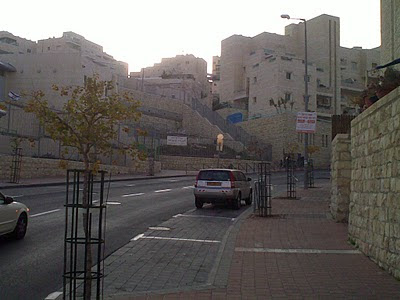 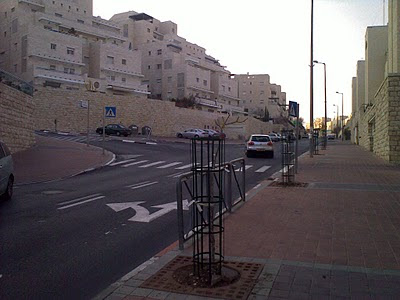 It's a middle class area, with lower prices than most of Jewish Jerusalem, so the folks here tend to be young families, not the top of the professions, a standard mix of orthodox, secular, Russians, the usual. The more enterprising families will move on in a few years, to be replaced by their somewhat younger counterparts; others will stay here for decades and never manage to move up the real estate ladder. It's not a slum, so that won't be a catastrophe for them.

Looking out from their windows one can see the security fence (the winding road) with Bait Sachur, a suburb of Bethlehem, or Tsur Baher, or, if they're pointed west, they can see the hotel at Ramat Rachel, which is inside the Green Line. None of it is very far. 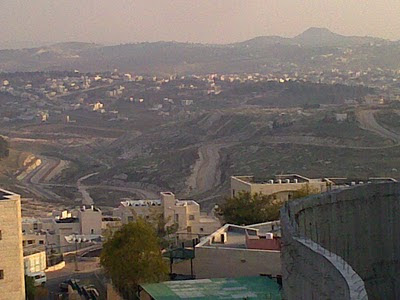 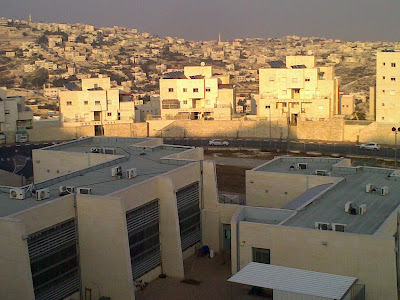 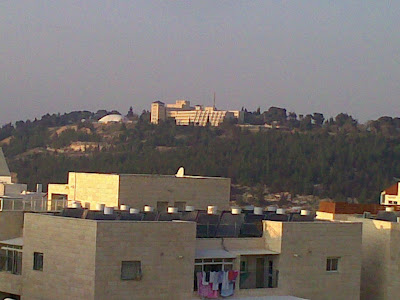 Finally, if they look down towards the bottom of the hill, they can see the new buildings, still under construction, that so impressed that Guardian fellow. 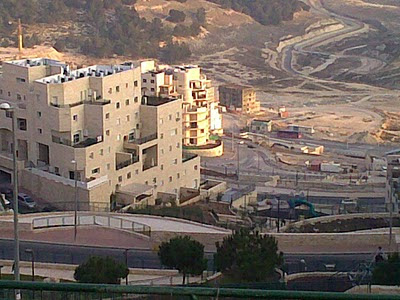 If it makes sense to you that these people must be uprooted so as to have peace, you might ask yourself what peace is for.

Next chapter of this series: Beit Safafa. I assure you that if you've found any of this so far disconcerting, the story of Beit Safafa is even worse. There's nothing in it that fits the universally accepted narrative. The only way to deal with it is to pretend it isn't there: which is what everybody does, of course.
Posted by Yaacov at 11:17 PM

The Har Homa thing made me wonder about the whole report.
I see that you strain to suggest that perhaps Har Homa may have been singled out because Har Homa is the most recent of Jewish neighborhoods. But if the Palestinians were ready to make some kind of deal on Jerusalem, it makes so little sense (even Palestinian sense) to make an issue of Har Homa.

Never going to happen. This is not Gush Katif, this is a built up urban area and the IDF would be hard pressed to expel 20,000 people from their homes. Israel to this very cannot find a solution for 5,000 people it forcibly uprooted from the Gush Katif; it has no plans to deal with potential resettlement of three times that number.

I don't see Israel giving up the Jewish neighborhoods in eastern Jerusalem even in a peace agreement.

I don't want to minimize the logistical difficulties of moving the people who live in Har Homa, not to mention the strife it would cause within Israel. Still, I think the last sentence Yaacov wrote could be easily turned around: If, after the Palestinian concessions outlined in the leaked documents, you're unwilling to uproot you're unwilling to uproot a relatively small number of people so that a peace can be found to a pernicious conflict that has claimed thousands of lives and ruined numerous others, what is peace for?

Still giving "The Guardian" the benefit of the doubt, eh?

"If it makes sense to you that these people must be uprooted so as to have peace, you might ask yourself what peace is for."
Then again, what sense does it make to strive for a two state solution if the second state is to accept its area being speckled by the first one providing potential cause for interference ... almost surely no recipe for peace

Anon
would you care to elaborate on the Arab villages to be land swapped?
- surely there should be a quid pro quo?

especially sind there seems to have been considerable migration into Israel.

"If it makes sense to you that these people must be uprooted so as to have peace, you might ask yourself what peace is for."

This was the phrase I was looking for. You have a way with words, Yaakov!
Best,

I live in Har Homa. My husband is a cop. I work in an office. My neighbors are bus drivers, cab drivers, installers, firemen, ambulance drivers, sales reps, office workers--in other words, working class folks. There are no other affordable neighborhoods in Jerusalem that aren't "settlements". The Jerusalem core and suburbs are extremely expensive, and this is a great, family-oriented neighborhood with lots of parks for our kids. Jews bought this land in the thirties and forties. It was the "unproductive" land, too windy, too barren, to waterless, to grow anything. More land was sold by a major landowner to Jewish buyers after 1967. Our major investment is our home, and we work in Jerusalem. Multiply that by 20,000.

We're not leaving. The Arabs can have Umm El Fahm in exchange if they need a land swap, and good riddance!

The author of the Guardian piece was Nicholas Blincoe, who is married, as it happens to an Arab woman - I think from Bethlehem - and has made a minor career out of trying to persuade himself that he is an honorary Palestinian.

("In 1995, Blincoe married the Bethlehem Palestinian film-maker Leila Sansour, director of the documentary Jeremy Hardy vs The Israeli Army (2003). - Wikipedia)

Whenever you critique a Guardian article, it is critical to research the author. The Guardian has considerable expertise in covering up the real agenda of their contributors with short, carefully edited bios that are designed to eliminate the suspicion among its naive readership that these people have a personal axe to grind.

In light of his wife's origins, it is obvious why Blincoe wrote the article he wrote, in the way he wrote it. He is one of the Guardian's large stable of "Israel can only do evil" contributors.