I spent a few hours this morning at the Maronite compound in the Old City. I admit that until recently, I hadn't even been aware there is such a place, nor that there are any Maronites in town. There are, it seems, and have been since the 19th century. They were extremely hospitable, and their small compound is beautiful. It's in the Armenian quarter, very near the Church of the Holy Sepulcher, which is the heart of the Christian Quarter. (The double domed church in the center of the picture) 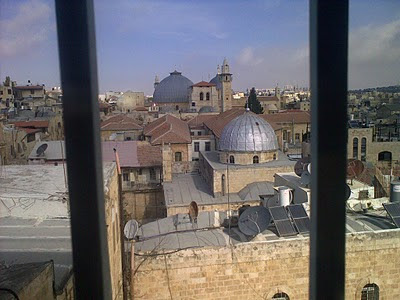 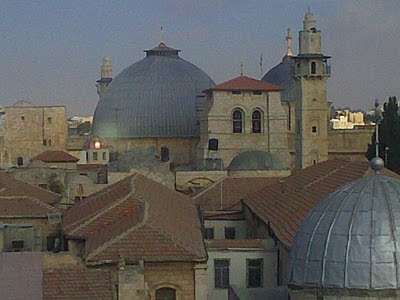 While there, a number of thoughts crossed my mind.

First, during the Ottoman era the entire Levant was one political unit, and people moved around it all the time. I have no doubt that there are Palestinians whose families have been here for millennia, perhaps even back to Jewish forebears; large numbers of them, however, got here in the 20th century, or the 19th, or the 18th. They aren't any more natives to this particular patch of land than the Jews who had been moving here since the 16th century (or earlier).

Second, there are probably a few thousand Arabic-speaking Israelis (I"m not certain how "Palestinian" our main host was) who have moved to Jerusalem since 1967 and live on the "Palestinian" side of the Green line. If you're a stickler for the interpretation of international law that says Israel is forbidden from allowing its citizens to move over the Green Line, that has to include non-Jewish Israelis, too. Which means these Arabs, since they don't live in the Jewish neighborhoods, must be pulled out when Israel divides the city.

The idiocy of the idea of dividing Jerusalem gets ever greater, the more you look at the details.

In the next section of this series I left the Old City, and walked south, toward the Abu Tor section.
Posted by Yaacov at 3:06 PM

a couple of days I read a few paragraphs into a description of the city of Houston by Norman Mailer (can't stand his style). But the few paragraphs made me think that it must be people who live in cities like that who come up with the plan for dividing Jerusalem.

No I am not trying to bash Americans here. Something suggested to me that it might be an adequate description of lots of big cities in lots of areas where people are used to cities which are as new as for example Berlin is.

Question: would anybody with a bit of love for western history volunteer to come up with a border through Rome? or how about Venice or Istanbul? OK they are all a bit younger than Jerusalem but old enough for musing about it.

I forgot to mention that one commenter's remark that the real Via Dolorosa is probably some meters below the current one, exemplified it beautiful and that event happened a mere 2000 years ago ...

and one more "westerners" get all upset when the Taliban destroy Buddhas but contemplate surgery on Jerusalem - it beggars belief - and at the same time I get informed that the factory that produced the ovens for you-know-what is now a museum which no doubt will make the keepers of the city-coffers where it is located rub their hands with anticipation at all the cash which is going to come their way - does that qualify as looting by proxy?

- profit from the dead, while giving harsh advice to the living.

Yaacov, here in the US, the Maronites seem consistently to side with the Palestinians and against Israel. Do you happen to know if their community in Jerusalem has similar politics?

Silke: Istanbul has a natural canal straight through the middle of it; the city is on two different continents. Splitting Istanbul would be a pretty simple task.

Your point stands, though. The hypocrisy of people who not only suggest but demand that Jerusalem be divided, but possess no capability for self-reflection is sometimes unbearable.

Istanbul (Constantinople) is much younger than Jerusalem.

While your point is well taken, Istanbul, alas, is not on two different continents.

It's on the European side of the Bosporus (i.e., both sides of your "natural canal," which is actually a long inlet, stretching NNW from the Bosporus, fed by several streams at its northern end.... The inlet is called "The Golden Horn" (Halic). Yes, that "Golden Horn."

As for Maronites siding with the Palestinians, 1. that's not entirely true; 2. they know that if they back Israel, they're toast, especially the community in Jerusalem, should it ever revert to Palestinian rule (though in that case, they're probably toast, anyway---whereas if they don't back Israel, they will not suffer, at least not more than bureaucratically, perhaps; 3. there's some historical issues there, where Israel can be seen as having betrayed Lebanon's Christians (though not necessarily Maronites) with regard to earlier alliances. 4. theology.

You can mix and match.

Perhaps a picture would be illuminating:
http://en.wikipedia.org/wiki/File:Istambul_and_Bosporus_big.jpg

Apology accepted, and I turn apologize for responding so curtly. I don't want to lower the well-deserved high standards of civility on Yaacov's blogspace with pedantry.

According to what I learned on Friday, there are about 7,000 Maronites who have been living in Israel (they or their forbears) since 1948, are Israeli citizens obviously, and are probably spread across the spectrum of Arab-Israeli political opinion. Only a very small number of them live in Jerusalem; our host was going out of his way to stay away from politics.

Then there are another 2,000 Maronites who were members of family of the SLA - the South Lebanon Army - who escaped to Israel in 2000 when the IDF pulled out of southern Lebanon. I doubt they're anti-Israel.

Regarding the Eastern Christian Churches such as the Maronites, it is important to keep a few things in mind. On the one hand, they are a declining minority in the Middle East. The Jews are a minority that is holding its own so they have an interest in supporting Israel. They also know Israel treats them well.
On the other hand, whereas the Western Churches, both Protestant and Catholic have undergone soul-searching in the wake of the horrors of the 20th century (two world wars and the Shoah) and have attempted to confront the antisemitic traditions of their churches, the Eastern Churches have not done so, primarily for the reason they were or are under Communist and Muslim domination for many decades. Thus, traditional antisemitic attitudes can be found in these Eastern Christians at the same time when Western Christians have learned to supress or at least downplay these negative traditions and attitudes.

Yaacov: Thanks. I was just curious.

Y. Ben-David: Thanks also — but, putting together my own casual observations of the USA with Yaacov's comment above, it seems that at least for the Maronites it goes vice versa: more friction from the Westernized branch than the Middle Eastern one. I would guess (and it's only a guess) that in the US the influence is less of western ecumenism and soul-searching, more "progressive" politics and the lead given by the Presbyterian & Methodist churches. Perhaps also, there is fear that being Israel-friendly will have negative consequences for other Maronites exposed to Hizbullah's tender mercies.