One Gaza Picture is Worth Which 1,000 Words? 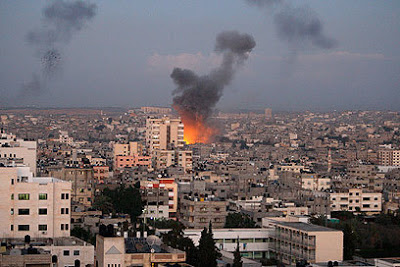 Now the question is, which 1,000 words does it replace? When we look at the picture, who are we seeing? Since it clearly depicts an act of violence, who shoud we recoil from, and who should we identify with?

Is it a picture of evil Israeli aggression against the helpless civilian population of Gaza, who are under attack and can't defend themselves? Or is it perhaps a picture of the cynical strongmen who control Gaza, and store their long-range Fajr misslies in the middle of a residential neighborhood, so that if Israel ever tries to destroy them, this will be the resulting picture?

Both interpretations can't be simultaneously true. Yet the picture, in spite of its powerful image, is quite useless in giving us a thousand words of context or even simply of clarification.
Posted by Yaacov at 8:24 AM

Email ThisBlogThis!Share to TwitterShare to FacebookShare to Pinterest
Labels: Israel at War, Media on Mideast