This evening, November 17th 2012, the top story on the BBC's news website is about the conflict between Israel and Hamas. The story itself is annodyne. The noteworthy thing is the series of six images which adorn the top section of the webpage. Since it will probably be taken down later this evening or tomorrow at the latest, I've recorded it.


Picture number one: an Iron Dome rocket streaking into the skies: 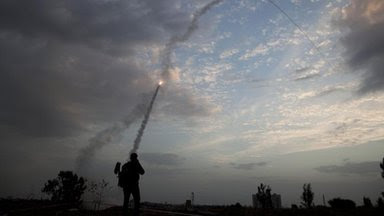 The second picture is of the reason Iron Dome is in action: Missiles being shot from the middle of a residential area in Gaza. 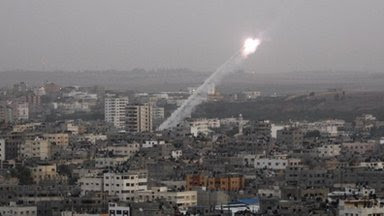 The next photo is of a large explosion in the middle of the city of Gaza. 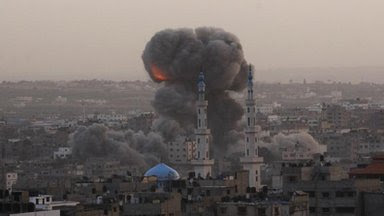 The next picture is of a damaged building, it could be on either side: 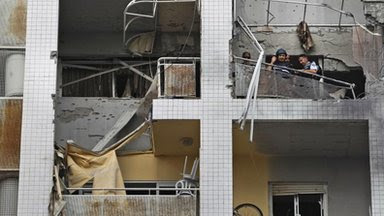 Next comes a picture of massing IDF tanks. Threatening. 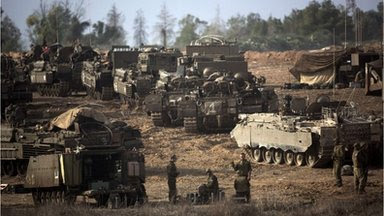 So far, so good. Each of these images was probably taken yesterday or today. I'm not confident all the readers of the BBS website will be able to identify each of the pictures, and I haven't seen any mention on the website of how even the BBC is documenting the Hamas war crime of shooting from residential areas, but at least they're putting the images out there and we can use them. The final picture, however, wasn't taken today, and isn't part of the story, since at the moemnt there is no physical contact between the IDF and the population of Gaza. So it was inserted not to show us the news - since it's not news - but for some other reason completely. On the immediate level, it serves to balance the picture of the IDF tanks; on a more fundamental level, it offers an image to frame the entire conflict. 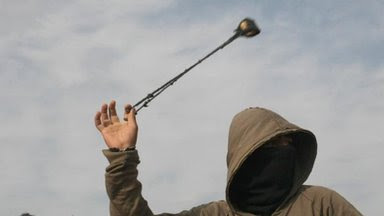 (Goliath, as history would have it, came from the vicinity of Gaza. And he's entered Western culture through a book written by Jews).

Email ThisBlogThis!Share to TwitterShare to FacebookShare to Pinterest
Labels: BBC, Media on Mideast

than again, since you note that a damaged building could have been on either side, maybe the kid is Jewish?

Those Israeli tanks aren't tanks. They're APCs. At least one of them was a tank, but it isn't anymore.

True but a casual layperson who isn't up on our equipment may not know that.

The boy (presumably) with the sling is the David vs. Goliath image the Palestinians want to portray of themselves. Most of these shots are posed anyway with no Israeli in sight.

Not that Israel uses bullets against stone-throwing youths but if he was, for example, killed while assisting the launch of a rocket Hamas would check his birth certificate and if under 18 (some say 21) announce that he was another child casualty.