How Air Berlin consciously, purposefully and cynically screwed its passengers - three times in a row

About a month ago I apologized to my readers for branching off into a bit of consumerism, and told how Air Berlin had intentionally lost the luggage of a few hundred passengers. Since then the story has gotten worse, so I'm posting a quick summary. 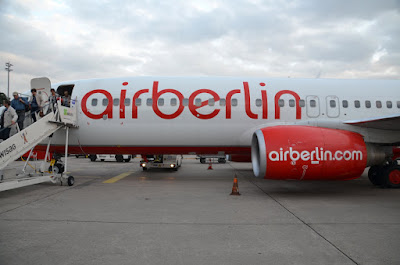 On July 5th 2015 Air Berlin sent off flight  AB3546  from Tegel airport in Berlin to Reykjavik in Iceland with about 250 passengers, and perhaps 50 pieces of luggage. This was not an oversight, nor the accidental misdirecting of a suitcase. You can't misplace 200 pieces of luggage without noticing what you're doing. Later, in Reykjavik, someone told us Air Berlin preferred some other cargo over our luggage. I don't know if this is true, but it seems plausible. Someone at Tegel decided that Air Berlin had more to gain by harming its passengers than by treating them as they expected when they bought their tickets.

So that was the first time Air Berlin  purposefully screwed us.

We spent the next 12 days in Iceland, having a wonderful time hiking in the mountains. Iceland really is spectacular! 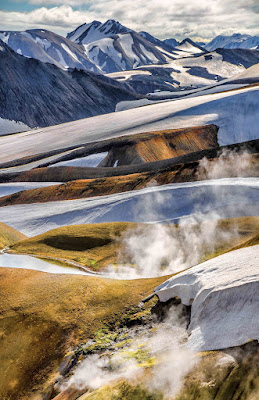 Some time soon I'll post on Iceland and JRR Tolkien, but not today.

During our entire time in Iceland, Air Berlin never made any attempt to contact us, much less offer information about what we might expect. The night of the flight they uttered nary a word, though of course they knew even before taking off that they were about to inflict harm on us. We arrived in Reykjavik at about 3am, and were left to figure out on our own what was going on; there was no Air Berlin representative in sight. The next morning we had to decide if and what to purchase to replace or not replace the lost luggage. No word from Air Berlin. Actually, we never managed to be in contact with an Air Berlin representative throughout our entire stay. Any updates and eventual retrieval of our luggage was all organized by the The Icelandic tourist company giving us logistic support for our hike. (Icelandic Mountain Guides, if you're interested. They were excellent. The diametric opposite of Air Berlin). So that was the second time Air Berlin harmed us.

Our luggage trickled in over the next 12 days. The first pieces reached our group on Friday, on the 5th day after the flight; mine arrived on the following Wednesday, just as we were on our way back to the airport to fly out of Iceland.

Since returning home we've all lodged complaints on the Air Berlin website. Interestingly, this website does not dwell on the possibility that the airline sometimes purposefully harms its passengers.  Air Berlin's responses to our claims are exactly what you'd expect of a company which holds its clients in contempt. Most of us have been offered small rebates the next time we fly with Air Berlin! As if any of us ever will! The sums seem to be totally random, except that they're all small. One or two of us got other offers, equally unacceptable. I was initially told to re-submit my claim, at a section of their website which refused to accept the claim.

So the third unacceptable treatment Air Berlin has meted out is its cynical ignoring of us, and its intentional disregard of all our attempts to obtain some sort of reimbursement for the costs we incurred through their direct actions. Clearly someone in Air Berlin has thought about the matter and decided that they're a big company, and we're small individuals, and that's simply a fact. Big companies can aford to despise small individuals secure in the knowledge that they'll get away with it.

And the source of their smug impunity? It's the fact they've done it before. In 2013 they lost all the luggage of an entire flight, didn't own up, disdainfully screwed the passengers, and lived to tell the tale. A mere two years later all the members of our group blithely bought tickets on an Air Berlin flight without any inkling how atrocious the airline is. Since July 5th lots of other folks have bought Air Berlin tickets, ignorant of the pernicious record of this airline. So why should Air Berlin give a hoot how much damage they inflicted on us?

Legalese postscript: There's a thing called the Montreal Convention which details what an Airline such as Air Berlin owes its passengers when it causes them harm. Article 22 details what happens when luggage is detained. Paragraph 5 is particularly interesting, and unambiguously describes the behavior of Air Berlin in our case:


The foregoing provisions of paragraphs 1 and 2 of this Article shall not apply if it is proved that the damage resulted from an act or omission of the carrier, its servants or agents, done with intent to cause damage or recklessly and with knowledge that damage would probably result; provided that, in the case of such act or omission of a servant or agent, it is also proved that such servant or agent was acting within the scope of its employment.

Interestingly, if you look long enough you'll find a document on the Air Berlin website which rather grudgingly admits (in passing, on page 15) that Air Berlin is, actually, aware of the Montreal Convention.

What have we learned from this? That NO ONE SHOULD EVER EVER FLY AIR BERLIN!

Addendum: Here's a story by some other fellow who's really really angry at Air Berlin.
Posted by Yaacov at 5:33 PM