I've been walking a lot along the suggested border through Jerusalem, making short videos of what it looks like. This evening I'm putting up a quick preview of Abu Tor: 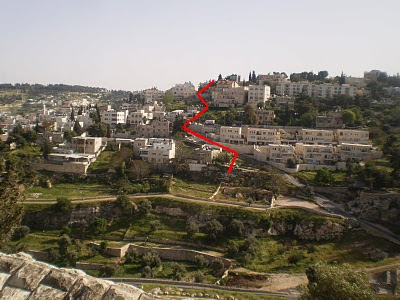 This snapshot was taken from Mount Zion, near the cemetery where Oscar Schindler is buried, looking south. The neighborhood on the next hill is AbuTor, and the red line runs between Jewish residences on the right (Israel, according to the Clinton Diktat) and Arab ones on the left (Palestine, according to the same principle). The reality in Abu Tor is actually quite a bit worse than this snapshot makes it seem, but this is rather bad. Keep in mind: dividing the city might bring peace - but if not, that red line will be a hostile border.

In this post here I walking in Abu Tor and looked at how dividing it will look like from it's alleys.
Posted by Yaacov at 10:45 PM

I've been following your blog for quite a while because I happily agree with you most of the time, or at least enjoy your remarks as you always have a very clear point to make.

Moreover, I feel like I'm well aware of how Jerusalem has been in the heart of the Jewish culture for thousands of years, how it's not mentioned even once in the Holy Quran, how under Israeli authority there's open access to every religion's holy sites, while under Jordan authority for almost 20 years there wasn't, and so on. So much for my "concessio".

Having said this, I would like to express my objection of how you continously seem to be linking the idea of "sharing" the city with the idea of virtually "dividing" it. I'm writing from Germany and we know pretty well how painful it is for a city to be divided. Yet I fail to see how after a prospective peace agreement, sharing Jerusalem as a capital for both Palestinians and Israelis necessarily implies raising another wall, having barbwire and all the ugly rest of it right through the city. What's the point of saying that only because this place might be more important for us than it is for you, you shall be entirely denied any of your own political aspirations for it? Let me add that this kind of "rejectionism" reminds me rather of the Arab's position on the 1947 partition plan, which seems like a comparison one wouldn't be too proud of.
Looking forward to hearing your thoughts, and please feel free to correct me where I'm mistaken. Forgive me for language problems.

markus
who do you think will take better care of the city which after all is dear to lots of people from all over the world for lots of reasons?
and to mention just one group of people, whose archeologists do you trust more to carefully and conscientously deal with anything that may surface?
Silke

Jerusalem issue is a pseudo-issue, a standard pattern of the Pals tactics: they bring them so that there is no chance negotiations can advance; then they blame zionist intransigence.

And, wasn't there an Israeli offer of sharing the city before (2001?) and wasn't it flatly rejected by the Pals leaders, as their traditions demand?

So, case closed. Gimme a break. If the Pals really wanted peace, they could have had their capital elsewhere, in Ramalah or, even better, in Amman or wherever. The problem is that they just cannot bear to witness jews owning the city. It's against their "weltanchaaung" (dunno how to spell that).

Marcus, can you name another city in the world whose political sovereignty is shared? You seem to take it for granted that such a thing is reasonable and practical.

Everyone assumes the city will have to be divided by walls because everyone assumes that some Palestinian faction will try to kill Jews at some point, and the only way to stop this will be through physical separation. It's the same reason why there is a security barrier surrounding Gaza and the West Bank. It almost seems inconceivable now that there was once nothing to stop terrorist infiltration.

I think Yaacov's snapshot is a vivid illustration of how difficult it would be to divide a city where everything is interconnected. And since the Palestinians are not ready to live side by side with the Jews, the reality is that a wall would need to be built at an enormous cost to separate the two communities and to prevent inevitable terrorist infiltration. Jerusalem would become a shadow of its present greatness, a dead end town like between 1948-1967. There is no support for such a redivision among Israeli Jews and the only way it could happen would be for it to be imposed through external force. And the prospects of it resulting in peace in such an aftermath between the Jews and the Arabs in Jerusalem is precisely zero.

That is why it ought to remain literally unthinkable.

You're right, of course, that I haven't presented a coherent argument, merely snippets. This is because not long ago I decided to stop using the blog as a wordy sort of twitter, always froth with no time to stop and think, and move towards long deliberations drawn out over time, so that the full argumentation reveals itself by and by.

So your question is relevant, and I'll offer a number of responses to it as we go.

In the meantime, however,a couple of Berlin-related comments.
1. The Berliners on both sides were the same people.
2. In spite of there being no animosity between the people, there was a very formidable wall, I seem to remember.
3. The moment the (one) government that had put up the wall was willing to take it down, it disappeared (the government, I mean, as well as its country).
4. Given this past, I'd expect that Berliners of all people would be the last to advocate dividing a city, and the first to recognize that it can never work, not even in the optimal conditions of Berlin.
5. Jerusalem's conditions are not optimal.

Apropos of your experiments with adsense - the ad is for Emirates airways and a virtual flight on their 777 - do I need to bring a British passport to try it out??

First Divide and Internationalize Mecca/Makka, as a confidence building measure.

Yaacov, in the future, when you do these kinds of pictures, take a screen-shot if you can of the Google Map overhead, or post a link to it, so we can get a feel for what part of the city you're talking about.

I can navigate my way around greater Chicagoland with ease, but flatlanders like me get disoriented separating one Jerusalem hill from another.

Google Maps has an option to embed the image which is pretty cool, but i can't do it in the comments.

I think if two neighbors have a history of good relations and every reason to continue that practice, they can work with even an awkward border between their two domains. Over time the border would become less and less important, and de facto if not de jure, non-existent for day-to-day activities.

But if the neigbors cannot get along, nothing is going to divide them in a way that allows a measure of peace.

You raise a valid point but only if you chose to ignore the realities... If city would be merely shared under who's laws would the city be run?!... In other words, how do you run a city when two sets of laws will apply?!...

Also, if the city is merely shared, how would you prevent a Palestinian extremists (and they will continue to exist even after a peace treaty will have been signed) from using Jerusalem as a gateway to reach his target in (e.g.) Tel Aviv?!...

The "border" between "Palestinian Jerusalem" and "Israeli Jerusalem" won't be like the border between Holland and Germany or Holland and Belgium any time soon if ever... Therefore a "shared" city would, by necessity, be a divided city...

Dividing Jerusalem would be suicide for Israel. As long as the Palestinians do not renounce their intentions of destroying Israel, there will never be a chance for division. While Old Jerusalem was in the hands of the Jordanians, Israelis could never get to that part. We do not need that again.