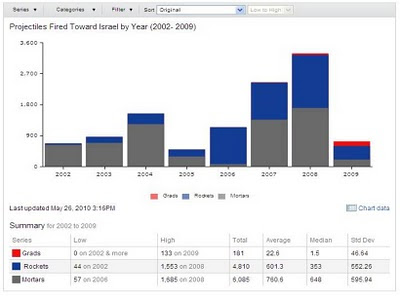 Commentary:
1. All projectiles were fired from Gaza; the Israeli blocking of traffic and movement between Gaza and the West Bank, and Israel's partial military control of the West Bank versus it's lack of direct control of Gaza have ensured that mortars and rockets don't get fired from the West Bank.

2. The inexorable rise from 2002-2004 reflects growing technical ability, not any change in ideology or political will. The steep drop in 2005 was the conscious decision of all Palestinian factions not to aggravate the Israelis as they prepared to disengage from Gaza. It would have been irrational to shoot at Israelis as they were about to leave,especially as some Israelis thought the leaving was a poor idea, and one didn't wish to strengthen their hand.

3. I do not know why 2006 is a bit lower than 2004, since by then the Israelis had left Gaza and there was no reason left for Palestinian restraint, but by 2007 they'd gotten over it and were back to the previous model: growing technical ability means more projectiles.

4. The total number of projectiles in 2009 mostly reflect the mass firing of everything Hamas had during the fighting in January. After that only very few projectiles were shot. (This mostly holds, so far, for 2010 also).

5. The Israeli operation in Gaza in January 2009 was demonstrably proportional: it achieved its goal, and then stopped.
Posted by Yaacov at 12:50 PM

I think that it is important to notice that the proportion of the longer range and more destructive Grads (katyushas) has grown as a percentage of all missiles fired at or into Israel,and, it appears, the number fired has increased in absolute terms.

Iti s a strange country that can shrug off 900 missiles fired in one year (2009) into its territory, though possibly most were in January 2009 during cast Lead.

But Israel does itself a disservice by not making sure that the current round of almost daily firings into Israel are barely reported, if at all.

I know what a grad is.

But can anyone explain to me what exactly is the difference between a rocket and mortar?

I will take a swing, Johnathan. Mortars are fired out of a launch tube, so much shorter range (generally around 3 km top range). On the other hand a Qassam rocket (the home made ones) have a range of 3-10 km and are self propelled once fired. So Mortars are fired from a man-portable artillery piece while rockets are self propelled (although some of the heavier ones may require a prepared firing position to be used.

Both types of weapons are rather inaccurate and are being fired at a area (IE the town of Sderot) rather than at a specific building in these cases. The Grad missiles are produced outside Israel and are smuggled in to be fired. They have a longer range and heavier payload, and are artillery rockets of the type that a modern army would use. (As are mortars).

Over at the Intelligence & Terrorism Information Center they have a 102 page pdf covering the rocket threat from 2000-2007.
On p. 93 they describe mortars as follows: "The mortar is a relatively simple artillery weapon, made of a steel pipe connected to a base. The mortar shell is made of three main parts: a quick compact fuse, the shell body (made of cast metal which acts as a steel sheath for the explosives) and the tail, which composed of a pipe packed with a propellant, whether standard or improvised. Mortar shells are usually fired from a single barrel, and the rate of fire depends on how quickly the projectile can bes replaced after each firing. [...] Mortar shell fire has several advantages: The mortar is considered a reliable, cheap and relatively easy to use weapon, requiring only one operator. It can be carried on foot and is easily deployed and removed without requiring special resources. It can be fired concealed or behind cover, allowing it to be used in urban territory near residential buildings. The expanding use of GPS devices and firing computers has turned mortars into weapons no less precise than cannons, while maintaining the fundamental characteristics of the mortar." On p. 95 they have a schematic diagram of a mortar shell.

I might as well admit that I was wrong about the Gaza operation. I wasn't against it, exactly, but I was skeptical that it would meet the goals its proponents were advancing and suspected it would end up as another Lebanon. But, while acknowledging the terrible human suffering involved (which we should be the first to admit), I think it's become pretty clear since last January that the operation was justified.

Thanks a lot.
One clarification, though - are the mortars fired from Gaza into Israel properly manufactured artillery which, like the grads, must be smuggled in from outside. Or are they like the rockets which, as I understand it, are improvised home-made weapons?

According to what I read in the pdf (p.94) they are homemade.