A Picture with the Wrong 1000 Words

I'm not going to say much about the so-called "Palestine Papers" yet, if at all. Being a trained historian and archivist, I can easily recognize the potential significance of a sizable collection of documents created during peace negotiations. I can also imagine some of the more obvious pitfalls. In any case, the value lies in a careful reading of the documents along with a solid understanding of their context and relation to other documents. Cherry picking single sentences and cutting them out of context is propaganda, not history; in a better world, it wouldn't even be acceptable journalism. (Hah!)

Anyway, I assume most readers of this blog are fully aware of the fine work being done by others. Elder of Ziyon is looking closely at lots of the hogwash being trotted out by Israel's enemies and their ignorant chorus, and calmly poking holes in it. So I don't need to do that. CiFWatch is documenting how the Guardian has no interest in supplying news, only in bashing Israel and the facts be damned. I honestly don't know how the CiFWatch folks manage to wade through that muck day after day and not lose their sanity. Hats off to them. Robin Shepherd has a magnificent post about how the BBC, Guardian and others are now publicly aligning with Hamas, since the PA negotiators have proven willing to consider some of Israel's claims and thus must be beyond the pale. Anyone who regards Israelis as anything less than monsters, is himself a criminal.

Ethan Bronner in the NYT has an article which, while not always accurate, is reassuring for its lack of excitement. The whole story, he seems to be saying, is yet another anecdote on the long road to wherever it is we're going. This is probably true.

Assuming I should be trying to say something original that you won't get elsewhere, well, the photo at the top of Bronner's article was actually quite tickling: 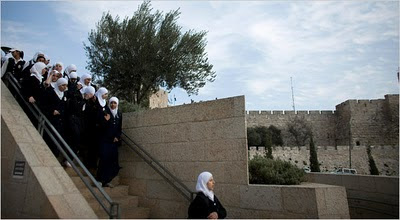 The caption in the NYT was "Palestinian schoolgirls on Monday near Jerusalem’s Old City. Documents reveal that much of Jerusalem would have remained Israeli as part of a peace deal."

Well, no. The schoolgirls are indeed Palestinian. And yes, they're near the Old City. You can see the wall right behind them. But they're actually in Mamila, on the Israeli side of town, and they're headed deeper into the Jewish side. In other words, this innocent picture of schoolgirls wandering through their town will not be possible if the city gets divided. The pundits all insist it will, of course, because the city will be divided but it won't really; but those are the pundits who look at this picture and haven't the faintest idea what it's about.
Posted by Yaacov at 10:50 PM

Hahaha even I recognized that!

Is there a pedestrian overpass there?

I walked down from one of the hotels near the Mamilla mall. Down several sets of steps, in a residential area. Then turn back to the left when I came to the road. And I can't remember how I got across.

Btw, a belated thank you for posting Red Rock. It's taken me months to get around to listening to the Arik Lavie, but I can finally catch a few words. Haselah Haadom really is a beautiful song. Now if I could only figure out the one about the train...
T34

OT
but fitting in the context:
John Gray has written a review of a new book about suicide bombers and says in an otherwise positive review:

When Atran is less than completely convincing, it is because he doesn't take his own lessons to heart. He is clear that having enemies is part of what it means to be human. Yet the solution he proposes for what he calls 'the mother of all problems - Palestine, the world's symbolic knot' involves turning enemies into friends, a fanciful notion in connexion with such a deep-rooted conflict. Palestine is not the only such conflict - think of Kashmir, whose division stands in the way of anything like stability in Afghanistan. Nor would a settlement in Palestine (supposing such a thing to be possible) bring peace to the Middle East, which would still be torn by rivalries between Iran and Saudi Arabia and the internecine wars of Islamism.
http://www.literaryreview.co.uk/gray_12_10.html

the other day I checked Albania - Google made me go to World News - they had illustrated the goings on with a picture of rioting Israeli Arabs from October last year. The caption showed when I held the mouse over it. Honi soit ...

yes - I climbed those very stairs myself ... and I'm definitely not a schoolgirl!!

More fauxtography. I thought it was only the Guardian that did this.

Those ignorant of the geography of Jerusalem will have no idea of its geography.... let alone where that photograph was taken.

What it says its Jerusalem is a lot hard to divide than foreign pundits like to think!

The point is not to divide Jerusalem.

The point is to keep on talking about dividing Jerusalem.

The point is to keep on talking about peace.

To further ensure that there can be no agreement, with the resulting further deterioration of Israel's international status and internale morale. (Such, at least, is the hope.)

(And of course so that the adolescents at Ha'aretz (et al.) can continue to crow that, "You see, the Palestinians don't have a partner and never did have a partner for peace.")

I honestly don't know how the CiFWatch folks manage to wade through that muck day after day and not lose their sanity.

Wrong question Yaacov. Think about the job of the streetcleaners who are dealing with the most disgusting dirt every day and keep their sanity intact.

@Peterthehungarian, street dirt doesn't put itself into the street just to spite us or with intent to cause us damage. It just ends up there. The dirt in the Guardian however... need I say more?

Talking of which, I came across an interesting Independent editorial; interesting because it was so neutral and objective regarding the Palileaks. Isn't it sad that a neutral objective newspaper article is newsworthy for those very reasons? It just shows the low to which the UK media in particular has sunk.

This photo is taken close to Yafo gate isn't it?